This past week Professor Lawrence Lessig of the Harvard Law School dropped into the Cato Institute to give his stump speech on his new passion: the corruption in government. There is no question that he has picked a subject large enough to test his own ambitions, for the ever expanding size of government opens up new avenues for political intrigue that leave the defenders of small government like myself in tears, no matter which party is in power.


Lessig and I, it seems, share a common bond on the identification of the disease. But his presentation to the Cato Institute did not reflect the chasm on the question of remedy. Lessig is a one‐​dimensional man. Once he thinks that public funding of elections is the cure for the political disease, he mounts his crusade. I am an academic, not a public crusader. And I don’t much appreciate being enlisted without my knowledge in a campaign not entirely to my liking.


So by way of penance, I think that Lessig should enlist himself in my academic cause. I hope that in the spirit of internet openness he will post on his web site my take on his venture. He could start by adding a third caption to the (unauthorized) use of my picture: After putting the words, Public Funding, he should make the new slide “Public Funding Skeptic”—which best captures the flow of our discussion. In the course of that exchange, I identified what I thought was the cause of the current malaise. 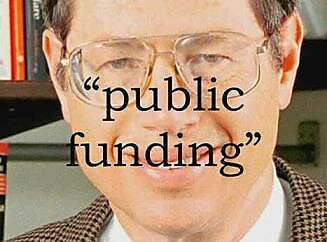 At various times, I extolled the virtues of Lochner v. New York, and championed a narrow reading of the commerce power. I passionately defended the use of term limits—10 in the house and four in the senate—that were short enough to have some bite, but long enough to allow for continuity in government. I attacked the built‐​in incumbent bias to modern elections. I went out of my way to denounce the limitations on campaign funding contained in the McCain/​Feingold Act, which just got beat up in the Supreme Court’s recent decision in Citizens United v. Federal Election Commission, just as I hoped it would do in my prior Forbes​.com column. I insisted that limitations on campaign finance could intensify the lobbying on particular issues. Truth be known, he was doing all the back‐​pedaling, not me.


You can be the judge: just listen to our discussion to see if it lines up with the mock‐​heroic account of his own intellectual derring‐​do he gave to his Cato audience, two of whom emailed me to ask, what gives: 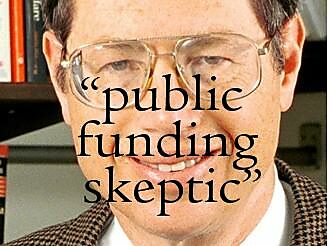 Note how much error Lessig can pack into a single sentence. It wasn’t a debate. I didn’t “concede” a thing, least of all to him. I didn’t “also want” term limits. I was gung ho for them. I didn’t particularly support public funding initiatives. I didn’t oppose them in small elections, even though I thought they were likely to fail.


Next note the omissions. Lessig never mentions that most of my remarks were devoted to explaining why efforts to stop political action won’t do much good unless and until the rules of the game are so altered so that politicians have little to sell or little to threaten. So in a spirit of generous reciprocation, I hereby announce that Lessig has “conceded” the soundness of all my attacks on the New Deal and thus count him as a principled ally in the fight for structural reform that returns us to the original constitutional design. Then think just how much harder that task has become. If the self‐​appointed champion in the war against corruption can’t be counted on to give an accurate account of a recorded dialogue in which he took part, what chance do the rest of us mere mortals have to put an end to political corruption?