I constructed a misery index and ranked 89 countries from most to least miserable based on the available data from the Economist Intelligence Unit. My methodology is a simple sum of inflation, bank lending and unemployment rates, minus year‐​on‐​year per capita GDP growth. The table below is a sub‐​ranking of all former Soviet Union (FSU) states contained in my misery index. 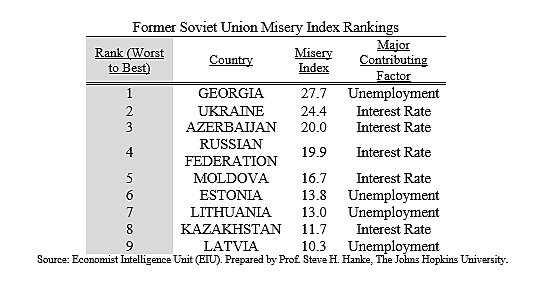 For these FSU states, the main contributing factors to misery are high levels of unemployment and high interest rates.


The low misery index scores in Estonia and Lithuania don’t surprise me as I helped both countries establish sound money with the installation of currency boards in 1992 and 1994, respectively. Latvia, a country Paul Krugman loves to hate, takes the prize for the least miserable of the former Soviet Union countries in this sub‐​ranking.