I dread the release of national standardized test scores because there is always big pressure to pull something out of them and declare, as quickly as possible, that they show your favorite reform works. In my younger days I’m sure I succumbed. But as time has gone on, I’ve concluded that any given year’s big release is just one year of new data from which nothing can be definitively determined about why scores have moved as they have. There are simply too many variables at play, from family wealth, to spending, to school choice, to what any given test asks, to conclude very much. So I hope you’ll bear with me while I throw all that out the window. The latest scores from the Program for International Student Assessment (PISA) do reveal something conclusive: It’s dangerous to look at one country and declare “We all must do what they do!”

After the Finns ranked among traditionally top, typically East Asian, countries in the 2001 PISA—a test of 15‐​year‐​olds containing reading, mathematics, and science portions—and replicated that a few more times, a veritable cottage industry arose declaring that the United States, and everyone else, should copy Finland. Google “Finnish miracle education” and your search results will overflow. Because Finland did so well, education analysts confidently proclaimed the need for fewer standardized tests, light‐​touch national standards, more teacher autonomy, and small classes, just like the Finns had.

But something has happened. The Finns have suffered the biggest score drops of any nation in mathematics and science. They dropped 37 points (on a 0 to 1,000 scale) in math (shown below) between 2003 and 2018, and 41 points in science between 2006 and 2018. In reading the news wasn’t quite as bad, with Finland only tying for the third biggest drop over time: 26 points between 2000 and 2018. In contrast, the United States saw a 13 point increase in science, a 1 point uptick in reading, and a 5 point decrease in math. 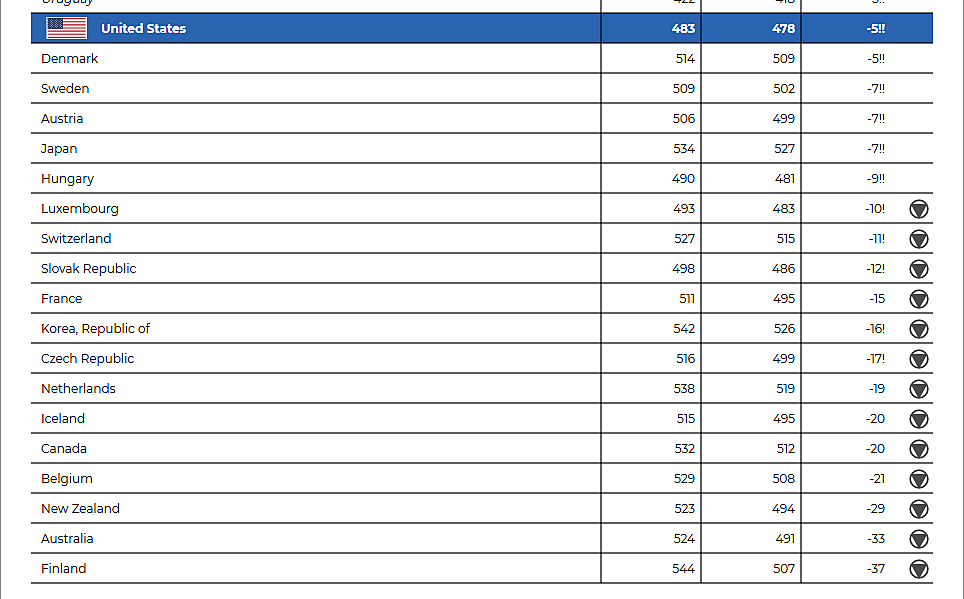 To be fair, Finland still places high among countries—depending on how you count various parts of China, tied for 4th in reading, 13th in math, 5th in science—and it is easier to have big drops when you start at greater heights. But these declines should nonetheless cast doubt on the wisdom of identifying one country that seems to do well and declaring “we should do what it does.” Of course, we should have had such doubt all along, because, again, numerous variables affect test scores, including that many people and cultures do not think test scores really mean that much. And they may be right to think that.

So thank you PISA for one thing this year: Revealing the dangers of deciding a single country has clearly figured out the right way to educate, and declaring we all need to be like it. Life is far more complicated than that.