In his Brookings Institution speech yesterday, President Obama called for more Keynesian‐​style spending stimulus for the economy, including increased investment on government projects and expanded subsidy payments to the unemployed and state governments. The package might cost $150 billion or more.


The president said that we’ve had to “spend our way out of this recession.” We’ve certainly had massive spending, but it doesn’t seem to have helped the economy, as the 10 percent unemployment rate attests to.


It’s not just that the Obama “stimulus” package from February has apparently failed. The total Keynesian stimulus is not measured by the spending in that bill only, but by the total size of federal government deficits.


The chart shows that while the federal deficit (the total “stimulus” amount) has skyrocketed over the last three years, the unemployment rate has more than doubled. (The unemployment rate is the fiscal year average. Two months are included for FY2010.) 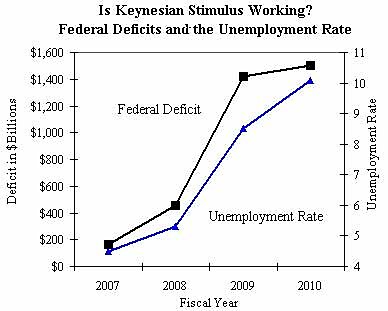 
The deficit‐​fueled Keynesian approach to recovery is not working. The time is long overdue for the Democrats in Congress and advisers in the White House to reconsider their Keynesian beliefs and to start entertaining some market‐​oriented policies to get the economy moving again.