Washington has once again rescued the citizenry from another disaster of its own design. Yes. At the eleventh hour, we avoided going over the fiscal cliff. What nonsense. And, alas, not even good nonsense.


For a change, let’s consider a few fiscal facts. The accompanying chart traces the evolution of federal government expenditures, as a percent of GDP since 1952. Based on the data, from 1952 until 2008 – when President Obama was first elected – we would expect, with an assurance of 95% that the size of federal government, as a percent of GDP, would fall in a range of 16.5% to 23.4% (see the accompanying chart). 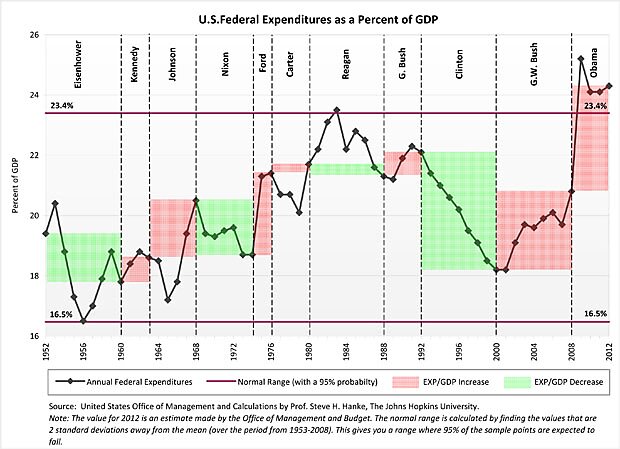 Since President Obama’s election, in 2008, the federal government has been in uncharted territory. Indeed, government spending has been “over the cliff” in each year of the Obama presidency. Today, for example, federal government expenditures, as a percent of GDP, register at 24.3%. This is nine tenths of a percentage point higher than the high end (23.4%) of the 95% historical range.