“Dean Dad” is angry with me. A blogger for Inside Higher Ed and a community college dean, Matt Reed found my argument in yesterday’s Wall Street Journal that the federal government should stop giving student loans to people without regard to their demonstrated ability to do college-level work “as offensive an argument as I’ve seen in major media in a long, long time.”

As I wrote in my piece, I absolutely understand the impetus to give anyone who wants it access to college. Apparently, though, you must be utterly heartless to say maybe we should be concerned about the unintended consequences of related policies, which we see with throngs of unprepared people entering college and never finishing, many with loans they struggle to pay off because they don’t have the necessary credentials to increase their earnings.

Mr. Reed thinks that my view is about “getting tough on the poor and badly prepared.” I suppose that’s one way to spin it. But it is not really about “getting tough” with anyone – it is about first doing no harm by providing an external check on people’s potentially damaging borrowing plans. And it is not about “targeting” the poor or anyone else, but protecting the unprepared. Of course, the poor are disproportionately the ones who are inadequately prepared, and that is something we need to deal with. As I wrote, though, that is something we should do at the K-12 level, not compound the problem with debt and no degree.

Reed next delves a bit into caricature, stating, “When someone in the Wall Street Journal suggests getting tough with the poor for their own good, it is worth asking some questions.”  I’d say it’s worth asking questions whenever people propose things in any outlet, but I would also suggest we assume people have good motives. I don’t doubt that Dean Dad has fine motives – he no doubt does work he finds morally fulfilling – but if he is going to suggest extra suspicion of me because I wrote in the Journal, it is perhaps worth a reminder that he is a community college officer, writing in a higher education outlet, calling, among other things, for more money to go to community colleges.

Thankfully, in the second half of his piece Reed gets into some substantive arguments. For instance, he writes, “Why is student debt increasing? Is it because students abruptly became much less capable around 2008? That’s when debt loads exploded, and yet, McCluskey offers no evidence to suggest that academic ability suddenly nosedived then.” What else happened in 2008? Reed writes that there was a big drop in “state and local appropriations for public higher education.”

I don’t doubt for a moment that cuts in public funding for colleges have had effects on prices, as have lots of factors. And there is certainly a lot more that can be written on this topic than I could fit in the 700-or-fewer words allotted for my piece. Indeed, writing more is happening right now!

Let’s, though, look at some data. According to the first graph below, student debt levels have been rising pretty steadily since well before 2008, and there is no especially severe kink in 2008. And the big increase in the percentage of students with debt, as illustrated in the second graph, seemed to start in the early 1990s. Probably not coincidentally, the federal government hugely expanded student lending in the Higher Education Amendments of 1992. 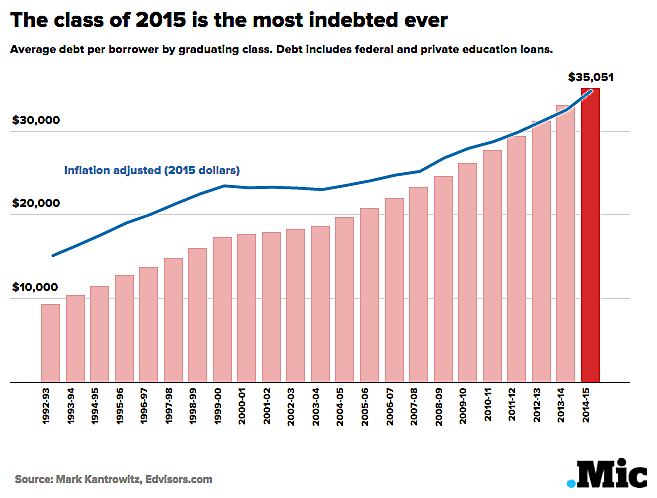 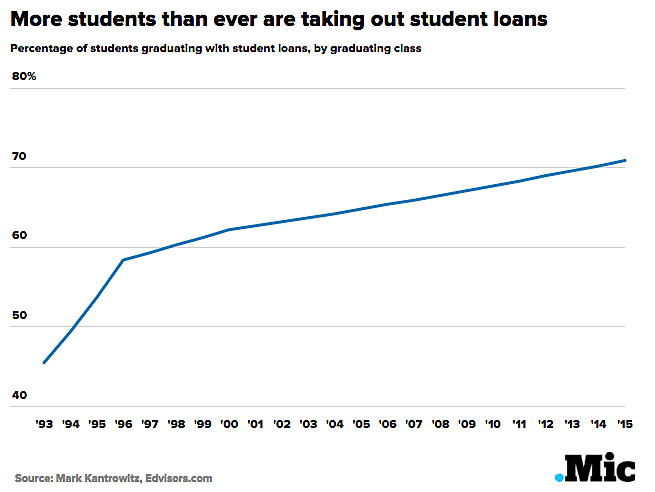 How about the theory that state and local cutbacks explain tuition increases? They no doubt have an effect, but as I have shown repeatedly, public colleges have raised their prices in both good public funding times and bad. And what, likely, has enabled that? The data and research suggest it is in large part increased availability of student aid, including loans!

Reed next argues that many debts are hard to repay because “entry-level jobs don’t pay very well,” and he laments that “McCluskey never addresses either the supply of entry-level jobs, or the minimum wage.”  Again, you only get so many words in an op-ed, so you simply can’t tackle everything. But Reed’s argument shines a negative light not on me, but what he apparently thinks college prepares many people for: entry-level jobs often paying, he implies, minimum wage. If that’s the case, what is the point, at least economically, of getting a degree? And if it is the case that you now need a degree to get a minimum-wage, entry-level job, does that not at least suggest – even to a non-heartless person – that we are suffering from massive credential inflation spurred by too many people going to college? And is allowing someone to take on substantial debt not a very dangerous proposition if their likely destination is minimum-wage employment?

Alas, Mr. Reed then accuses me of not considering the “aspirations” of low-income students “important.” He concludes, “That’s a moral question, and that’s why I chose the word ‘offensive’ rather than ‘incorrect’” when characterizing my views. But suppose there are lower-income people – or any others – whose aspirations include not entering programs they are unprepared to complete and, in the process, incurring burdensome debt? Is it moral to hand them big bucks and just say “good luck paying that back”?

Yes, Mr. Reed, there can be competing moral goods.

Reed next takes offense at the possible baseline requirements for federal loans I offer in my piece: “To enroll in an associate degree program or higher, perhaps a minimum GPA of 3.0 on a 4.0 scale, and an SAT or ACT score equal to the national average, should be required.” He suggests that by not mentioning that such measures skew against “students of color and low-income students” I am being “dishonest.”

Again, I had limited space, so I could not explore every consequence or consideration stemming from my proposal. But Mr. Reed is absolutely right to question these suggestions. Indeed, I wrote “perhaps” they would be good measures, and in the next paragraph, wrote:

There are, of course, problems with this. Are a 3.0 GPA and 1000 SAT score the right threshold? And it is troubling to have government give some people loans while refusing others, especially since “objective” measures may not tell us everything important about individual borrowers.

Sadly, Reed ends his piece with more caricature – literally – saying that I ultimately call for “tough-minded bankers” to “crack down on the poor,” and he rails that, “Telling the poor they’re too risky to bother educating is not what a civilized society would do,” but instead “sounds like a Dickensian caricature.”

Does that really fit with what I wrote? It is correct that I think truly private lending is part of the solution to the college completion and debt problem, but did I really argue that the poor should be kept out of college “for their own good” and we shouldn’t “bother” educating them? It doesn’t seem that way to me. It seems like I specifically called not for treating the poor as some monolithic group, but as individuals:

All of this is why lending should be in private hands. Private lenders would have strong incentive to work with even the financially poorest, when college-ready, based on the likelihood they will succeed and repay their loans. Private lenders also would be using their own dollars, and so would have a powerful incentive to be honest with unprepared students, telling them, “The loan you want does not make sense for me…or you.” This would all be coupled with the flexibility to consider multiple measures of postsecondary readiness, as well as differing loan terms, and thus to treat potential borrowers as the unique people they are.

The good news, perhaps, is that Mr. Reed does not see me as a lost cause…I think. He concludes, “If your only message to the poor is that lifelong poverty is for their own good, I have nothing to say to you.”

Obviously, Mr. Reed had a lot to say to me. And, of course, I do not think “lifelong poverty” is good for the poor. Indeed, that is a major reason that we should think hard about handing debt to people who will likely not finish the programs they start and will then struggle to pay back their loans. As for what we should do to help the poor – as opposed to not hurt them further – I’d love to discuss solutions with Mr. Reed. But that will take a lot of back-and-forth, and probably a little less caricature.