The revelations of IRS officials targeting conservative and libertarian groups suggest that now is a good time for lawmakers to review a broad range of the agency’s activities. Since the agency’s last overhaul in the IRS Restructuring and Reform Act of 1998, its budget has exploded from $33 billion to a proposed $106 billion in 2013. 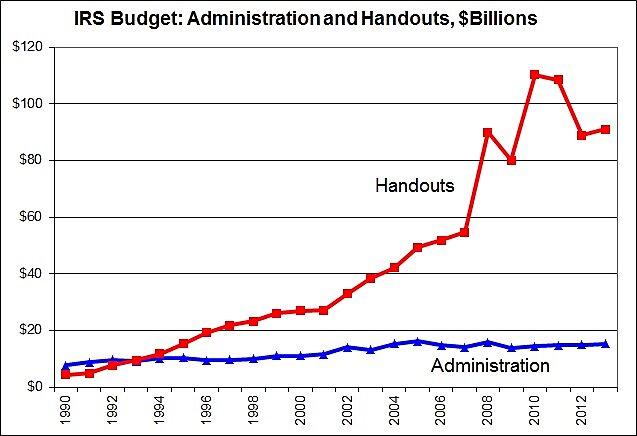 How should we reform the IRS budget? First, we should terminate the handout programs. That would save taxpayers more than $90 billion annually and cut the IRS budget by 86 percent.

The largest IRS handout is the refundable part of the EITC, which is expected to cost $55 billion in 2013. Many policymakers favor the EITC as a “conservative” handout program because it encourages people to work. But the EITC itself creates a discouragement to increased work over the income range that it is phased-out. It also adds to tax-code complexity and has an error and fraud rate of more than 20 percent.

The EITC is an example of how big government begets more big government. We certainly wouldn’t need the EITC incentive to work if we slashed all the taxes and welfare programs that currently encourage people not to work.

It’s a similar situation with other IRS handout programs, such as the $1 billion “Therapeutic Discovery” grant program. These grants are supposed to “produce new and cost-saving therapies, support jobs and increase U.S. competitiveness.” But it would be better to accomplish those goals by repealing the excise tax on medical devices and slashing the high 40 percent U.S. corporate income tax.

As for the $15 billion in spending on IRS administration, we could dramatically cut that cost with major tax reforms. In particular, a consumption-based flat tax would hugely simplify the code and greatly reduce paperwork costs of the IRS and taxpayers alike.

Looking ahead, the IRS budget is expected to balloon in coming years as the agency plays a key role in implementing ObamaCare. Unless the health care legislation is repealed, IRS outlays are expected to soar from $106 billion this year to $263 billion by 2023.