The Irony of the President’s STEM Initiatives 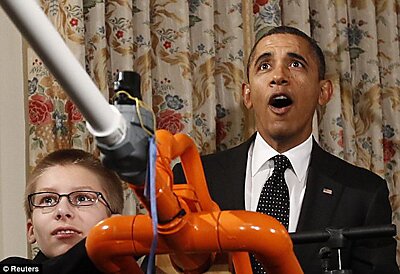 The media tide of the past two days has carried in a great flood of stories on science, technology, engineering and math (STEM) education. ABC, NBC, AP, Reuters, the Christian Science Monitor, Politico, the Detroit News, and others joined in. This torrent of attention is due to a White House science fair at which the president announced several initiatives to boost student achievement in those fields. Details are scant, but based on the administration’s press release it seems that $100 million or so would go to encourage particular kinds of teacher’s college programs. Various extracurricular STEM programs funded by non‐​profit foundations were also touted in the release.


The obvious irony in the president’s plan to tweak teachers’ college programs is that those programs are themselves a key part of the problem. The nation’s state school monopolies typically require most or all of their teachers to either have a degree from a government‐​approved college of education or to be pursuing such a degree during evenings and weekends. Few of those studying or working in STEM fields are willing to sit through a teachers’ college program—with good reason. Not only are these programs often pointless according to their own graduates, they are not associated with improved student performance. They are a requirement without a function–at least without a function that benefits students. The one thing they do accomplish is to erect a barrier to entry that protects incumbent teachers from competition, allows the specter of “teacher shortages” to be floated at regular intervals, and thus to justify above market wages [state school teachers receive compensation that is roughly $17,000 per year higher than their private sector counterparts].


As a result, many of the most promising teaching candidates in these fields are weeded out from the start. President Obama’s plans to “improve” this barrier to entry into the profession amounts to reupholstering the deck chairs on the sunken Titanic.


But how to ensure that only effective teachers lead the nation’s classrooms given that the government certification process is not just useless but counterproductive? Here, again, there is irony. Somehow, in the thousands of different fields in which scientists and engineers work every day, the competent are distinguished from the incompetent. And somehow, those who underperform are either helped to improve or cut loose to seek work in a field (or with an employer) to which their talents are better suited. It is ludicrous to suggest that managers can effectively evaluate the work of the scientists and engineers they employ in every field _​except_​education.


The media would do us all a favor if they would look past the Obama administration’s marshmallow launcher for a moment and contemplate the effect that our massive barrier to entry into the teaching profession has on recruiting scientists and engineers.