The Obama administration is showing interest in reforming the U.S. corporate income tax. That’s good news because a lower corporate rate would boost domestic investment, which in turn would generate more jobs and higher wages and incomes.


A lower corporate rate would also attract more inflows of direct investment from abroad—foreign-based businesses expanding their plants and building new plants in the United States.


I updated this chart from our book, Global Tax Revolution. It shows that during the 1980s, the United States enjoyed higher inflows of foreign direct investment (FDI) than outflows. But since then, the pattern has reversed—our companies are now investing more abroad than foreign‐​based companies are investing in the United States. (Data is from the BEA). 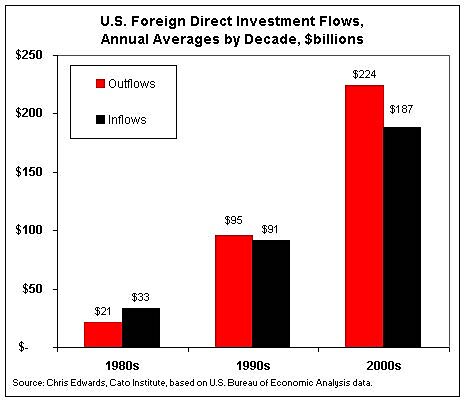 There are numerous factors that affect these flows, but there is no doubt that taxation plays an important role. If we cut our corporate tax rate, we would attract more investment (move the black bar upwards), which would be good for the U.S. economy.


There is an important caveat with the data, however. A large portion of FDI involves mergers and acquisitions. If a foreign company takes over a U.S. company, that’s an investment inflow. If such a takeover is a market‐​driven event that increases efficiency, that’s fine with me. However, there is evidence that foreign companies are taking over U.S. companies because we have anti‐​competitive “worldwide” corporate tax rules.


So the solution is to move to a “territorial” corporate tax system and substantially reduce the federal corporate tax rate. That way, we wouldn’t artificially encourage the takeover of U.S. firms, while also attracting larger inflows of job‐​generating greenfield investments.


A final note on the chart: it clearly shows that U.S. international investment has exploded in magnitude over the last couple of decades. That explosion has greatly increased the importance of having a competitive corporate tax code. So good for the Obama administration for looking into possible reforms.