The House Ways and Means Committee held hearings on infrastructure yesterday. The testimony by D. J. Gribbin was excellent. He was special assistant to President Trump for infrastructure policy and is very experienced in the field.

Many of Gribbin’s themes support points I’ve made for years regarding infrastructure and federalism. Gribbin and I don’t come to the same policy conclusions, but his observations about current policy failings are spot on.

1. States Own Most Infrastructure. Gribbin notes, “the federal government owns less than 7 percent of the nation’s public, non-defense infrastructure.” The disconnect between federal funding and this state ownership leads to “inefficiencies.” That is for sure, I’ve discussed here and here.

2. Federal Funds Come from the States. Gribbin says, “The federal government does not have the ability to create funds, just reallocate them,” making the point that federal aid ultimately comes from taxpayers who live in the 50 states. To me that simple reality creates a high bar for federal action—why not let the states keep their own money and fund their own highways and transit?

3. Costly Federal Regulations Are Tied with Aid. Gribbin argues, “Expenditure of federal highway funds triggers the need for compliance with an exhaustive list of federal requirements. These requirements not only impose direct additional costs on projects, but can also cause delays, which in turn lead to further costs.” I discuss some of these costs here.

4. Federal Aid Induces States to Delay Projects. State and local governments delay high‐​value projects for years waiting for federal money when they should go ahead and get the projects done. Gribbon calls this the “coupon effect” and points to a highway example in Kentucky. I’ve discussed (#12) this problem and pointed to delayed seaport, highway, and air traffic control projects. In my view, if the Feds got completely out of the way, infrastructure would be built faster and cheaper with fewer delays.

5. Federal Aid Crowds Out State Investment. Gribbon says that sometimes “state and local governments reduce their own, planned expenditures on infrastructure after having received federal grants.” He points to a Federal Reserve study finding crowd out of highway spending. A more serious problem I’ve noted (#17) is that federal aid crowds out the private provision of infrastructure such as airports, seaports, and transit.

6. U.S. Infrastructure Costs Are Suspiciously High. Gribbin is right that “U.S. infrastructure costs have become unacceptably, and inexplicably, high,” meaning the costs to build specific projects. He points to a study finding that “real per‐​mile construction costs for the Interstate Highway System were three times higher in the 1990s than they were in the 1960s.” And Gribbin hits the nail on the head saying that policymakers put little effort into researching the root causes. Congress is all about more spending, never cost reduction.

7. Federal Regulations. Federal rules inflate construction costs, as I discuss here (#9). Gribbin says that his “anecdotal conversations with state transportation departments suggest that accepting federal funding reduces purchasing power by 20 to 30 percent due to myriad regulations.” Gribbon discusses how other countries have much shorter environmental reviews for projects such as highways.

8. Governments Fail at Maintenance. Gribbin says, “Today, state and local leaders are incentivized to ignore maintenance … so they can spend those funds elsewhere. Yet, poor maintenance practices damage the long-term quality of infrastructure and result in a maintenance backlog that must be met by future taxpayers.” Federal aid induces the states to buy expensive systems such as fancy rail projects. The politicians get the photo ops at groundbreaking, but then they ignore maintenance until a crisis hits, as we’ve seen with subway systems in Boston, New York, and D.C.

The solution to all these chronic problems is to end federal funding of infrastructure owned by the states, including highways, transit, airports, and seaports. In addition, the federal government should privatize or devolve to the states many of the assets it owns, including Army Corps facilities, the postal system, passenger rail, dams and water projects, and many other items. 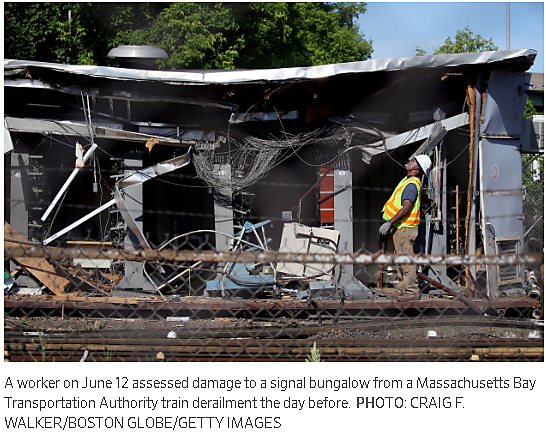