Hillary Clinton says that “we are dramatically underinvesting” in infrastructure and she promises a large increase in federal spending. Donald Trump is promising to spend twice as much as Clinton. Prominent wonks such as Larry Summers are promoting higher spending as well. But more federal spending is the wrong way to go.

To shed light on the issue, let’s look at some data. There is no hard definition of “infrastructure,” but one broad measure is gross fixed investment in the BEA national accounts.

The figure below shows data from BEA tables 1.5.5 and 5.9.5 on gross investment in 2015. The first thing to note is that private investment at about $3 trillion was six times larger than combined federal, state, and local government nondefense investment of $472 billion. Private investment in pipelines, broadband, refineries, factories, cell towers, and other items greatly exceeds government investment in schools, highways, prisons, and the like.

Let’s drill down on the federal portion of infrastructure investment. The largest piece is investment in intellectual property at $88 billion, which mainly includes research spending by agencies such NIH and NASA. Terence Kealey argues against government research spending, but let’s put that aside for this blog.

Now let’s switch to OMB data, which is more detailed but is measured a bit differently. The table below shows federal spending on “physical capital investment” broken out between direct spending and aid to the states. 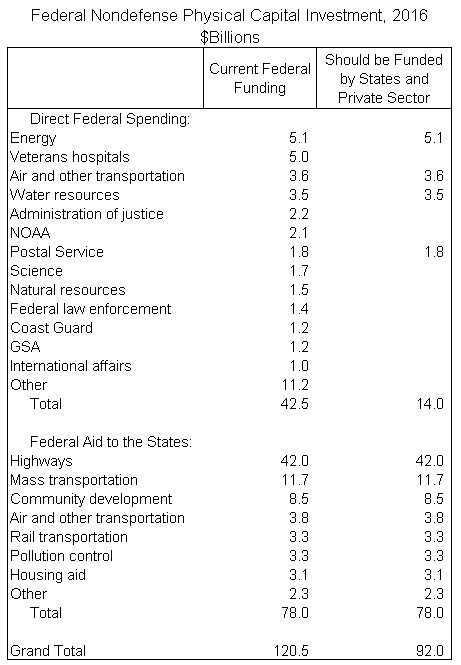 I contend that most federal spending on physical infrastructure should be instead funded by state and local governments and the private sector. In the table, I indicate that about three-quarters of federal nondefense investment in 2016 ($92 billion out of $121 billion) should be handed over to the states and private sector.

Why devolve infrastructure funding? Experience shows that federal investments are often misallocated and mismanaged. Decentralized decisionmaking in the states and the marketplace is superior to central planning from Washington. Infrastructure investment has both costs and benefits, and so trade-offs need to be made. Those trade-offs can best be made by local decisionmakers directly responsible for both the financing and spending sides of the investment process.

These themes are explored in essays at Downsizing Government, such as here and here.

Whoever wins the election, we are likely to have a debate on infrastructure next year. I hope that we can get beyond simple cheerleading for more federal spending. Improving America’s infrastructure is about more than spending. It’s about efficiency, innovation, and sound management of investments, and when you consider those factors, a decentralized approach is the best way to go.