The chart below shows that the number of federal subsidy programs has almost doubled since 1990, reaching 2,282 today. The genesis of the CFDA was the explosion of hand‐​out programs under President Lyndon Johnson. Members of Congress needed a handy guide to inform their constituents about all the new freebies. 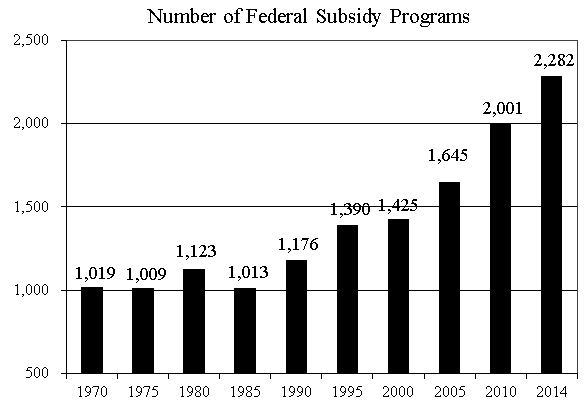 The growth in subsidies may be good for the politicians, but it is terribly corrosive for American society. Each subsidy program costs money and creates economic distortions. Each program generates a bureaucracy, spawns lobby groups, and encourages more people to demand further benefits from the government.


Individuals, businesses, and nonprofit groups that become hooked on subsidies essentially become tools of the state. They have less incentive to innovate, and they shy away from criticizing the hand that feeds them. Government subsidies are like an addictive drug, undermining American traditions of individual reliance, voluntary charity, and entrepreneurialism.


The rise in the size and scope of federal subsidies means that Americans are steadily losing their independence. That is something sobering to think about on July 4.


Which subsidies should we cut? We should start with these.