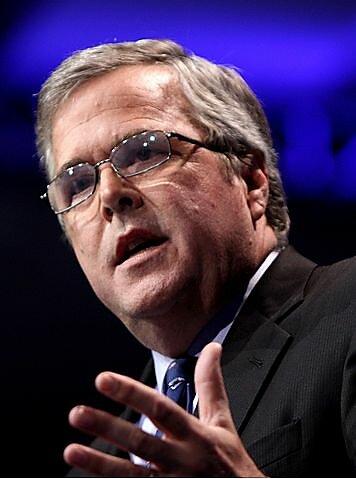 Speaking off the cuff, it’s easy to make a mistake. But for a long time former Florida governor – and trendy presidential possibility – Jeb Bush has been criticizing Common Core opponents for, among other things, saying the Core was heavily pushed by the federal government. His still getting the basics wrong on how Core adoption went down must be called out.


Interviewed at this weekend’s celebration of the 25th anniversary of his father’s presidential election – an event where, perhaps, he actually knew which questions were coming – Bush said the only way one could think the Core was a “federal program” is that the Obama administration offered waivers from the No Child Left Behind Act if states adopted it. (Start around the 7:15 mark.) And even that, he said, basically came down to states having “to accept something [they] already did”: agree to the Core.


Frankly, I’m tired of having to make the same points over and over, and I suspect most people are sick of reading them. Yet, as Gov. Bush makes clear, they need to be repeated once more: Washington coerced Core adoption in numerous ways, and creators of the Core – including the National Governors Association and Council of Chief State School Officers – asked for it!


In 2008 – before there even was an Obama administration – the NGA and CCSSO published Benchmarking for Success, which said the feds should incentivize state use of common standards through funding carrots and regulatory relief. That was eventually repeated on the website of the Common Core State Standards Initiative.


The funding came in the form of Race to the Top, a piece of the 2009 “stimulus” that de facto required states to adopt the Core to compete for a chunk of $4.35 billion. Indeed, most states’ governors and chief school officers promised to adopt the Core before the final version was even published. The feds also selected and paid for national tests to go with the Core. Finally, waivers from the widely hated NCLB were offered after RTTT, cementing adoption in most states by giving only two options to meet “college‐ and career‐​ready standards” demands: Either adopt the Core, or have a state college system certify a state’s standards as college and career ready.


Gov. Bush, the facts are clear: The feds bought initial adoption with RTTT, then coerced further adoption through NCLB waivers. And all of that was requested by Core creators before there was a President Obama!


Let’s never have to go over this again!