Writing in National Review, Charles C.W. Cooke decries the pharaonic spectacle of the modern presidential funeral. “Whether he was a great man or a poor one, George H. W. Bush was a public employee.” In order to honor his passing, Cooke asks, do we really need to shut down the stock market, postal service, and much of the nation’s capital for a national day of mourning? The whole business marks “another step toward the fetishization of an executive branch whose role is supposed to be more bureaucratic than spiritual.” I’m glad he said it first, but he’s absolutely right. 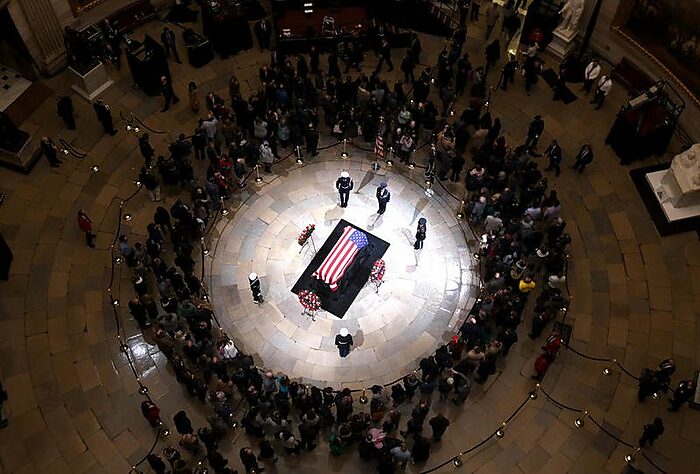 Our first president, ever conscious of the precedents he could set, didn’t want an elaborate state funeral. “It is my express desire that my Corpse may be Interred in a private manner, without parade, or funeral Oration,” Washington declared in his will.


You’ve got to respect that—but, of course, we didn’t. Instead, “there was a massive public funeral at Mount Vernon,” Brady Carlson recounts in his 2016 book Dead Presidents, with a parade organized by Washington’s Masonic lodge, including “musicians, clergy, troops, and a riderless horse, a military tradition reportedly dating back to the age of Genghis Khan”—along with funeral orations by four ministers, topped off with “three general discharges of infantry, the cavalry, and eleven pieces of artillery, which lined the banks of the Potomac.”


The passing of the ninth U.S. president, William Henry Harrison, the first to die in office, set more precedents still. The interminable inaugural address that supposedly killed him featured Whiggish professions of deference to the legislature and the people–the president as a modest “accountable agent, not the principal; the servant, not the master.” Yet, according to the White House Historical Association, ‘the 30‐​day ceremonials surrounding the death of Harrison were modeled after royal funerals.” “There were bells, cannons, and funeral dirges,” Carlson writes, the White House was draped in black as “the late president and his casket rode in a black and white carriage pulled by six white horses, escorted by a pallbearer for each of the country’s twenty‐​six states and held up on a raised dais so the ten thousand people who turned up could see.”


We fought a revolution to rid ourselves of kings, but, ironically enough, in the mother country, the sendoff for a former head of government tends to be decidedly less regal. The last British Prime Minister to get a state funeral was Winston Churchill. The pomp surrounding Margaret Thatcher’s 2013 funeral blurred the lines, a development the Telegraph’s Peter Oborne condemned as a “constitutional innovation… foolish and wrong”:

Still, the funerals of other recent prime ministers have tended to respect that distinction, typically featuring no more pageantry than might be accorded any prominent private citizen.


In America, by contrast, presidents are legally entitled to state funerals, whose details are meticulously prescribed in the 133‐​page Army Pamphlet 1–1. “Regulations say up to four thousand military and civilian support personnel can take part in state funeral services …. And typically the sitting president announces government offices will close for the day of the funeral.” 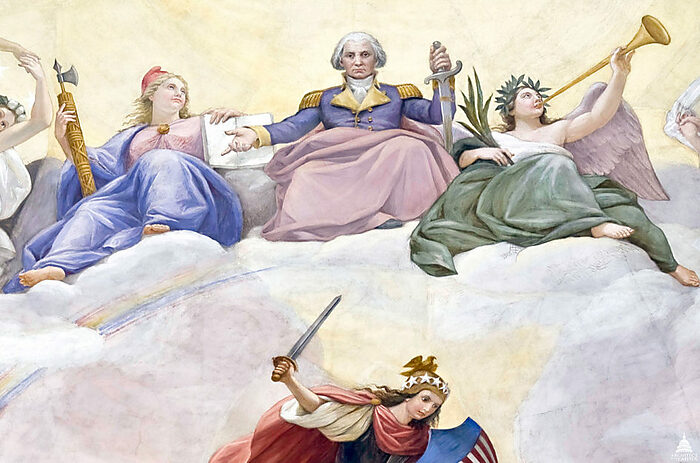 The president described in the Federalist was to have “no particle of spiritual jurisdiction.” Yet there’s an unsettling, quasi‐​mystical orientation toward government at work in much of the ritual. While lying in state in the Capitol Rotunda, the president’s body is placed atop the Lincoln Catafalque: the funeral bier constructed for our 16th president–one of the holy relics of the American civil religion. Above him hangs the cathedral‐​like ceiling, which features the fresco “The Apotheosis of Washington,” painted by Constantino Brumidi in 1865. It depicts the first president “sitting amongst the heavens in an exalted manner, or in literal terms, ascending and becoming a god.” I generally find the so‐​called “New Atheists” insufferable, but we could use a little of their militant impiety when it comes to our presidential cult.


George H.W. Bush’s funeral arrangements have been comparatively modest as these things go. So were Gerald Ford’s back in 2007. The man who proclaimed himself “a Ford, not a Lincoln” and toasted his own English muffins was praised once again for his humility because he skipped the horse‐​drawn processional. Instead, his 587‐​page funeral plan included a motorcade tour of Alexandria with stops at the World War II and Lincoln memorials and a military “missing man” flyover by 21 F-15E Strike Eagles at the burial in Grand Rapids.


The modern presidency, Cooke observes, smacks more of Caesar than of Coolidge. Here, as elsewhere, we could profit from Silent Cal’s example. “Coolidge’s will,” Carlson notes, “was just twenty‐​three words long, and his funeral ceremony lasted a mere five minutes.” In death, as in life, he was not a nuisance.