Whether people in a society think that most others can be trusted seems to predict many positive social and economic outcomes. A common criticism of liberalized immigration is that the newcomers come from societies with low trust, so they might bring their low‐​trust attitudes with them, pass them on to their descendants, and leave our society with less trust, potentially reducing future economic growth.


Economist Bryan Caplan ran a recent exercise showing that immigrants and their descendants make substantial gains in trust, virtually assimilating by the second generation. In a similar vein, my research shows that trust levels among the second‐​generation are basically the same as Americans whose ancestors have been here for at least four generations according to survey responses on three related questions.


Excluding black respondents from the General Social Survey (GSS) on the question “Generally speaking, would you say that most people can be trusted or that you can’t be too careful in life?” does improve trust for Americans who can trace their lineage in the United States back at least four generations (all of their grandparents were born in the United States), but the biggest trust improvement is for the immigrants themselves. I limited my sample to the years 2004 to 2014 to focus on more recent immigrants. Figure 1 presents my original findings that include respondents of all races. Figure 2 excludes all black respondents. 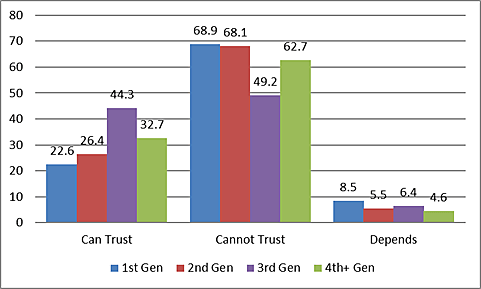 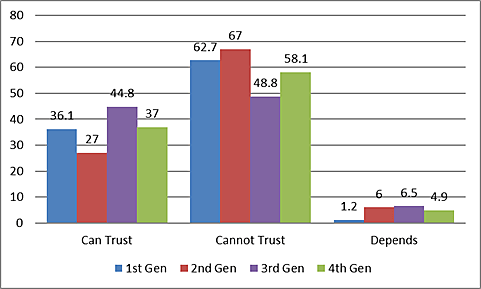