Cato published a paper of mine today entitled “Terrorism and Immigration: A Risk Analysis.”  I began this paper shortly after the San Bernardino terrorist attack in December last year when it became clear that few had attempted a terrorism risk analysis of immigration in general, let alone focusing on individual visa categories.  There were few studies on the immigration status of terrorists and the vast majority of them were qualitative rather than quantitative.  Inspired by the brilliant work of John Mueller and Mark Stewart, I decided to make my own.

From 1975 through the end of 2015, 154 foreign-born terrorists murdered 3024 people on U.S. soil.  During that same time period, over 1.14 billion foreigners entered the United States legally or illegally.  About 7.4 million foreigners entered the United States for each one who ended up being a terrorist.  Startlingly, 98.6 percent of those 3024 victims were murdered on 9/11 (I did not count the terrorists as victims, obviously).  However, not every terrorist is successful.  Only 40 of those 154 foreign-born terrorists actually ended up killing anyone on U.S. soil.

Immigrants frequently enter the United States on one visa and adjust their status to another.  Many tourists and other non-immigrants frequently enter legally and then fall out of status and become illegal immigrants.  I focused on the visas foreigners used to enter the United States because applications for that visa are when security screenings are initially performed.

Table 1, copied from my paper, shows the chance of being killed in a terrorist attack on U.S. soil by foreigners by visa category.  Only three people have been killed on U.S. soil in terrorist attacks caused by refugees – which is a one in 3.64 billion chance a year of dying in an attack by a refugee.  If future refugees are 100 times as likely to kill Americans at past ones, all else being equal, then the chance of being killed in an attack caused by them will be one in 36 million a year.  That’s a level of risk we can live with. 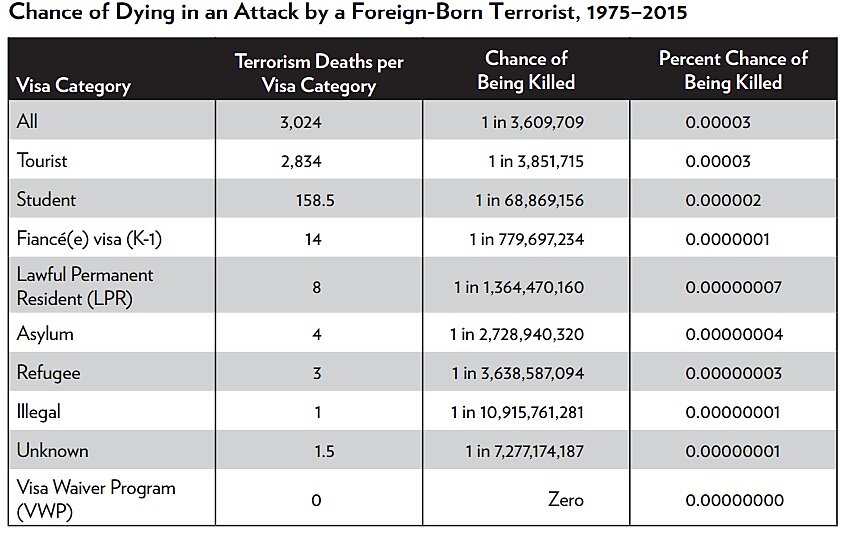 I chose to begin my analysis in 1975 for three main reasons.  First, I wanted to make sure to include many refugees because of the current public fear over Syrians.  The waves of Cubans and Vietnamese refugees during the 1970s provided a large pool of people in that category.  Second, I had to go back to the late 1970s to find refugees who actually killed people on U.S. soil in terrorist attacks.  Although some refugees since then have attempted terrorist attacks, none has successfully killed anyone.  Third, I wanted to see if there was a different result before and after the modern refugee screening system was created in 1980.  The timing of that immigration reform coincides with the end of successful refugee terrorist attacks but the small sample of three victims prior to 1980 and none afterwards speaks volumes.

In any project of this size, many findings and facts get left on the editing floor.  Here are some: