However, other researchers who combine first and second generation welfare-use do not combine these generations correctly. They use the Current Population Survey (CPS) data to measure immigrant household welfare use rates and benefit levels that includes the U.S.-born children of immigrants who live in the household, but they exclude tens of millions of U.S.-born children of immigrants who do not live in their parent’s households. Thus, counting only the children in the immigrant households produces a limited and biased estimate of first and second-generation welfare costs because the vast bulk of means-tested welfare targets households with children. If the second-generation must be included at all, a better approach would be to include second-generation adults as well.

Robert VerBruggen at National Review convinced us to estimate the welfare consumption levels and use rates for immigrants and their children of all ages (the first and second generations) relative to Americans in the third-and-higher generations in 2016. We initially intended to look only at immigrants who arrived in 1968 or later, which is the year that the Immigration Act of 1965 went into effect, but we were unable to limit the CPS sample and their children so precisely. We were also unable to estimate the welfare use rates or benefit levels for Medicaid or Medicare because of myriad data limitations. Figure 1 shows the result of the welfare use rates multiplied by the benefit levels for each generational group for four welfare and entitlement programs. This produces an average per capita welfare cost for each group for each program that combines adults and children.

People in the first and second generations consume an average of 33 percent fewer welfare benefits, per capita, than native-born Americans who are in the third-and-higher generations for these four programs (Figure 1).

Figure 1: Per Capita Welfare Costs by Program for Immigrants and Their Children Relative to Third-and-Higher Generation Americans, 2016 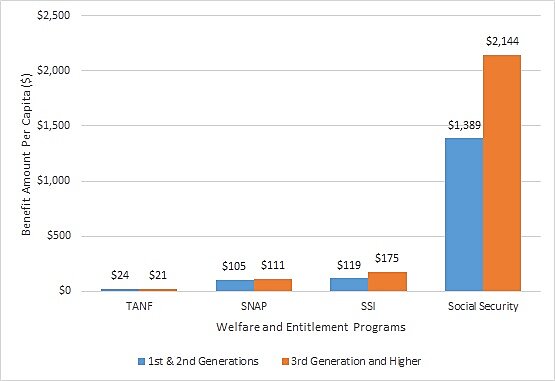 Source: Authors’ analysis of the 2017 Annual Social and Economic Supplement to the Current Population Survey.

Attributing the cost of welfare consumed by the entire second-generation to immigrants returns results that are similar to our previous findings. Immigrants, whether one includes their U.S.-born children or not, consume fewer welfare and entitlement benefits than native-born Americans in the third-and-higher generations.