A common fear about lower-skilled immigrants is that they will push native-born Americans with similar skills out of the labor market. In recent years, this argument focuses on the harm to native-born teenagers who are most substitutable with lower-skilled immigrants—especially those on the H-2B visa for seasonal non-agricultural work. This effect is supposed to be greatest in the summer time when American teenagers are on school vacation.

Teenagers are working less than they used to but the U.S. labor market has changed in myriad ways that are unrelated to immigration, especially when it comes to the opportunity cost of teenagers. In responding to an op-ed by Senator Ben Sasse (R-NE) that lamented the loss of teenage work ethic (an oxymoron if my personal observations and experience as a teenage worker is representative), economist Ernie Tedeschi showed that increased enrollment in summer school can explain virtually the entire decline in their summer employment, at least for the month of July (Figure 1). The data allowed Tedeschi to separate part-time and full-time school enrollment after 1989. Years ago, I noted that increased summer school enrollment explained much of this decrease by leaning heavily on this Chicago Fed Letter that stated:

[w]e find no compelling evidence that associates the recent decline in teen participation with greater labor market competition due, for example, to larger cohorts of teens or an increase in the numbers of unskilled workers entering the labor market because of the 1996 welfare reform or changes in immigration. 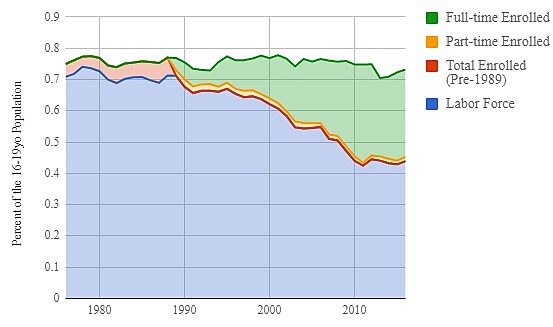 Although Tedeschi does not mention immigration in his blog, his findings are broadly consistent with estimates of how immigration affects teenage employment and wages. Figure 1 is consistent with economist Peter McHenry’s finding that “low-skilled immigration to an area induces local natives to improve their performance in school, attain more years of schooling, and take jobs that involve communication-intensive tasks for which they (native English speakers) have a comparative advantage.” Another finding by economist Christopher L. Smith found that native-born American teenagers do compete with low-skilled immigrant workers because both are relatively unproductive but also that such competition incentivizes teens to acquire more education so that they do not have to compete directly with immigrants in the future. Thus, low-skilled immigrants do push some teens out of the labor market temporarily while they upskill.

Upskilling is also consistent with research by economists Giovanni Peri and Chad Sparber that finds increased lower-skilled immigration induces lower-skilled natives to specialize in jobs that require communication in English while the immigrants specialize in jobs that are more manual-labor intensive, an effect called task specialization. They estimate that task specialization reduces immigration’s downward wage pressure because natives react by adapting and specializing in more highly paid occupations, not by dropping out of the job market. This effect decreases wage competition between lower-skilled natives and immigrants by around 75 percent.

It could be that teenagers find school enrollment more fulfilling because competition with immigrant workers has lowered wages in that segment of the labor market. There is a lot of academic evidence that that effect is hard to find and, if it does exist, extremely small. However, if such a negative wage effect from immigration does impact a large cohort of American workers then we should expect to find it among teenagers. Furthermore, even if teenage wages do decline because of immigrant competition, curtailing low-skilled immigration may not have any effect on wages or employment as employers mechanize low-skilled jobs in response—a more expensive production method relative to hiring immigrants but less expensive than paying natives a higher wage. The more likely explanation is that the long-run monetary return for the teenager from education if greater than working a summer job, especially since states now subsidize summer school.