Immigrants Are Not Causing Low‐​Skill Natives to Quit Working

The Center for Immigration Studies (CIS) released a report by Jason Richwine last week entitled “Immigrants Replace Low-Skill Natives in the Workforce.” The Cato Institute has previously pointed out the inaccuracies, methodological tricks, and disingenuous framing that have plagued CIS’s reports on numerous occasions, but this latest report performs poorly even relative to those prior attempts. More importantly, its underlying numbers actually buttress the case for expanding legal immigration.

The report’s central finding is that the share of native-born high school dropouts in their prime who are not working has grown at the same time as the population of similarly educated immigrants. While Mr. Richwine explicitly states that this finding “does not necessarily imply that immigrants push out natives from the workforce,” he goes on to imply exactly that throughout the report, blaming immigrants for “causing economic and social distress.”

First of all, “distress” would imply that at least some more prime-age, lesser-skilled natives are out of work—i.e. unemployed or out of the labor force—now than prior to the wave of immigration in the 1990s. But this is incorrect. The numbers of such workers in their prime (ages 25 to 54) actually declined by 25 percent from 1995 to 2014, according to Census data. For the last decade, the number has remained roughly constant. Richwine is just wrong to state that “an increasing number of the least-skilled Americans [are] leaving the workforce." (Note that while the CIS report focuses on native men, the trends in all of the following figures are the same direction regardless of sex.)

Figure 1: Prime-Age Native-Born High School Dropouts Unemployed or Not in the Labor Force (1995-2014) 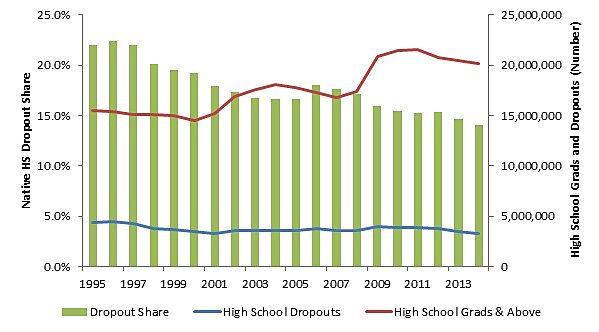 Mr. Richwine meticulously avoids absolute numbers in his report, focusing instead on the share of lesser-skilled natives who are not working. But the decline in the absolute number of high school dropouts explains all of the increase in the share who are not working. There are still the same small number of people at the bottom who have dropped out of high school and the workforce. But because so many other natives upgraded their skills, these troubled people are a greater share of natives in their skill demographic, while being a smaller share of natives overall.

As immigrants are entering the lower rungs of the economic ladder, natives are leaving those rungs in great numbers. Immigrants have partially filled-in the gaps that they have left, but on net, there has actually been less competition for jobs by new low-skilled workers. An increase in low-skilled labor supply simply does not explain any of the trends in low-skilled employment because there has been no such increase. The basic premise of the CIS report is wrong.

From this perspective, we see that the collapse in the number of native-born high school dropouts is a good thing because it represents an exodus of working Americans to higher education and better employment opportunities. A much larger share of employed natives is acquiring skills and moving up the economic ladder. Perhaps this is the most important point: the share of prime-age, native-born Americans who have dropped out of high school is falling fast—by 50 percent from 1995 to 2014. 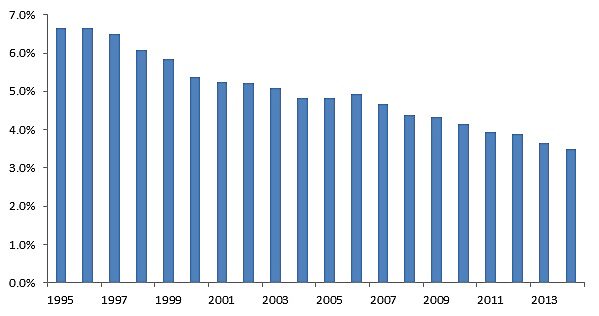 As immigrant workers have entered the United States, natives have become more educated and skilled. There are good reasons to believe that this relationship is causal, as lesser-skilled immigration boosts wages for higher-skilled workers. Having immigrant workers to do these lower-skilled jobs frees natives to pursue higher quality employment. Mr. Richwine calls it “naïve” to think that immigration can “lift all boats” by encouraging natives to get educated, but whether it will lift all boats or not, it has lifted more boats than not. This skill-upgrading in response to immigration is not a new phenomenon. As I’ve written before:

In fact, immigration may have caused America’s “high school movement” -- the increase in high school enrollment from 12 percent in 1910 to 50 percent in 1930. In a detailed 2002 study of the period for the International Monetary Fund, Rodney Ramcharan concluded, for instance, that “the massive immigration of unskilled labor in the late 19th and early 20th century triggered the U.S. high school movement” by raising “the private return to education and engendered schooling investment.”

As economists Francesco D'Amuri and Giovanni Peri have found, “immigrants often supply manual skills, leaving native workers to take up jobs that require more complex skills – even boosting demand for them. Immigrants replace ‘tasks’, not workers.” This, in turn, results in higher wages for natives. CIS’s report—while disingenuously framed—provides no evidence to contradict this finding.

Mr. Richwine suggests that the United States should radically transform its labor markets in order to accommodate a shrinking sliver of its population—those prime-age high school dropouts who aren’t working. Even if this proposal did benefit them, it would make no sense to hurt the 99 percent to attempt to help the one percent. There are other options to help the one percent of natives who, for whatever reasons, cannot hold a job or complete government-provided high school.