There is large empirical economics literature that attempts to causally explain how different cultural traits affect economic output. The most import trait in the culture literature is generalized trust, which is “the subjective probability with which an agent assesses that another agent or group of agents will perform a particular action.” In a forthcoming paper, we argue that the trust literature is not worthy of your trust as it is beset by serious data and methodological problem that undermine its core results.

We calculated the WEIRD scale measure for each PUMA as a population average based on the country of origin for the population. To construct this measure, we calculated the weighted average WEIRD score based on respondents from the ACS microdata for each PUMA. PUMA respondents who are from a country not included in the WEIRD scale are dropped from the sample entirely to remove the most severe issues with sample‐​selection bias. The WEIRD scale only compares the cultural difference between native‐​born Americans and citizens of 75 other countries, where the majority of immigrants in the United States came from during the 2013–2017 period. The earned income data come from the American Community Survey for those years.

Figure 1 establishes the simple relationship between logged income per capita in each PUMA and how culturally different the population of that PUMA is compared to native‐​born Americans. The shaded area in Figure 1 is the 95 percent confidence interval (CI). It shows a tight positive relationship between a PUMA’s cultural difference and income at the lower levels of the WEIRD scale. The 95 percent CI widens significantly in PUMAs with greater cultural difference and becomes difficult to interpret as there are fewer PUMAs where local culture was significantly different due to immigration. However, it is clear that immigration‐​induced cultural differences on the PUMA level are not correlated with lower income. 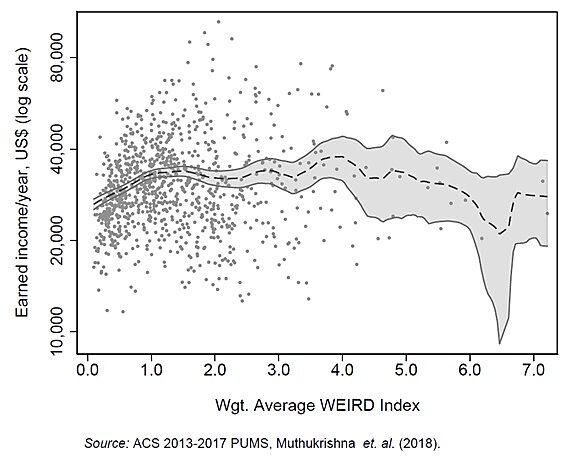 The WEIRD scale has many of the data weaknesses that hobble the trust literature, including its reliance on the WVS, so it merely suggestively estimates the relationship between immigrant cultural distance from native‐​born Americans and income on the PUMA level. Figure 1 is not a causal relationship, by any means, but it does not show problems except when the CI is so vast as to be virtually meaningless based on a single PUMA data point with a WEIRD score of slightly over 6.

[1] We adjusted the WEIRD Index to a zero to 100 scale from their original 0 to 1 scale for ease of interpretation.