I’ll Take “Whatever Evidence I Like” for Hundreds of Billions, Alex

Right before the President's 2012 budget proposal was released, I wrote a bit about what I was hearing the administration would call for with Pell Grants. Notably, ending year-round Pell on the grounds that the cost was too high and "there was little evidence that students earn their degrees any faster." I found this argument a bit odd because eligibility to get more than one Pell award annually started in just the 2009-2010 academic year -- way too recently to have any conclusive evidence on its effect one way or the other.  I was also surprised because, well, evidence of success has never been important in decisions to keep or kill programs.

Take the embattled -- and near dead -- Washington, DC voucher program. There is currently a concerted effort to revive the program, but the Obama administration and most congressional Democrats evinced no qualms about killing it despite its well-documented success with graduation rates and parental satisfaction. Documented, in fact, using "gold-standard," longitudinal, random-assignment research methods. That documentation is why Cato Center for Educational Freedom director Andrew Coulson last week testified to the House education committee that "there is one federal education program that has been proven to both improve educational outcomes and dramatically lower costs. That is the Washington, DC Opportunity Scholarships Program."

Take the 21st Century Community Learning Centers program, which funds after-school activities intended to keep kids off the streets and provide them with social and educational enrichment.  A series of studies -- the last published in 2005 -- found that not only didn't the program appear to provide many positive results, it might have had overall negative effects:

In light of its (at-best) impotence, did the program go away? Of course not! In FY 2010 it was appropriated $1.17 billion, and the Obama administration has asked for $1.27 billion for FY 2012. And this despite not just poor performance, but a pesky $14 trillion national debt.

This is small potatoes, though, compared to some other programs. Take Head Start: Run by the Department of Health and Human Services, Head Start is supposed to give poor kids an early boost in life. In reality, however, it has proven itself to be largely worthless, with benefits disappearing after just a few years. It's a finding that was repeated in a federal evaluation released in 2010, which reported that "the advantages children gained during their Head Start and age 4 years yielded only a few statistically significant differences in outcomes at the end of 1st grade for the sample as a whole."

Clearly, "evidence" doesn't drive budgeting decisions -- it's just a term that's invoked when it's politically expedient to do so. But maybe one more bit of evidence is in order to illustrate this. Compare increases in overall federal spending on K-12 education to the academic performance of 17-year-olds, our schools' "final products": 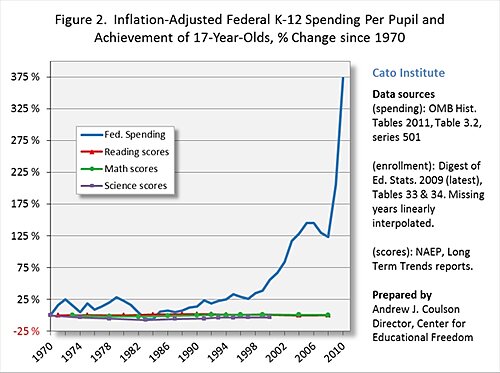 In light of this, if federal policymakers really cared about evidence, would they still be spending money on education at all? The evidence on that, unfortunately, is almost indisputable.