The Congressional Budget Office (CBO) has released new budget projections. In 2019, the federal government will spend $4.4 trillion, raise $3.5 trillion, and borrow $900 billion to cover the resulting deficit. As spending grows faster than revenues over the coming decade, deficits will grow larger.


CBO’s chart below shows budget data a share of gross domestic product (GDP). Except for four years under President Bill Clinton, the government has run almost continuous deficits in recent decades. Indeed, the budget has only been balanced 14 percent of the years since the 1930s, which was the great divide in U.S. fiscal history.


The government has been spilling red ink a long time, but the current rash of deficits and rising debt is unprecedented. On the chart, the spending‐​revenue gap in coming years is large and persistent. But even that is an optimistic view based on steady economic growth over the next decade.


Look at what happened during the last recession and consider that we are overdue for one today. Spending shot up 5 percentage points of GDP from 2007 to 2009 and revenues fell more than 3 points. That recession started after the deficit had narrowed to about 1 percentage point of GDP, but the next one will start when the deficit is already more than 4 points. Also, the last recession started when accumulated federal debt held by the public was 35 percent, but now it is 78 percent and rising. 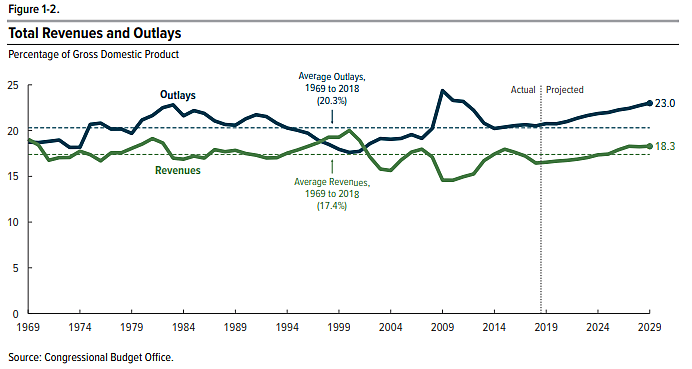 We are in a much worse fiscal position today if a recession should strike. A bad recession would be a disaster for federal finances, which in turn could trigger broad damage to the global economy. Despite the obvious threat, the politicians in Washington have been asleep on the debt issue for years.


Former Starbucks head Howard Schultz announced that he may run for president as a fiscally responsible independent. He is correct in saying, “I think the greatest threat domestically to the country is this $21 trillion debt hanging over the cloud of America and future generations.”


Running as an independent is an uphill battle, but let’s hope that fiscal barista Schultz can deliver espresso shots to wake up the two main parties about the debt threat.