There was another historical decline in border apprehensions that was even quicker, more dramatic, and far cheaper than the decline in border apprehensions that began in 2006 and has trended downward to the Trump administration. It occurred in the 1950s when the government streamlined the Bracero guest worker visa program and allowed more legal migration. These two periods of time lasted about the same number of years and provide an easy comparison between two means of diminishing illegal immigration: by making it legal or doubling down on enforcement.

The border patrol apprehended virtually the same number of illegal immigrants in 1954, when the deregulated Bracero program began operation, as in the year 2006. The deregulated Bracero program lasted from 1954 to about 1965 and the 2006 decline has lasted until today. Apprehensions fell after both of those but they fell further and much more rapidly in the 1950s (Figure 1). Apprehensions declined by 93 percent from 1954 to 1956 but only by 34 percent from 2006 to 2008. Figure 2 shows the same numbers indexed to 1 in the first year. Clearly, the Bracero Era witnessed a much more rapid and complete decline in illegal immigrant entries than the crackdown from 2006 to today. 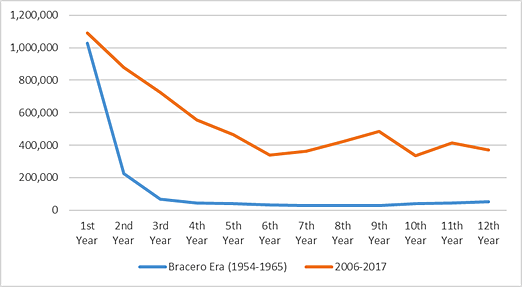 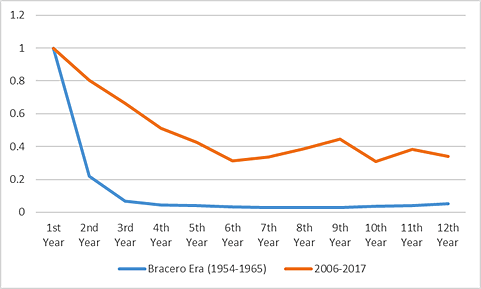 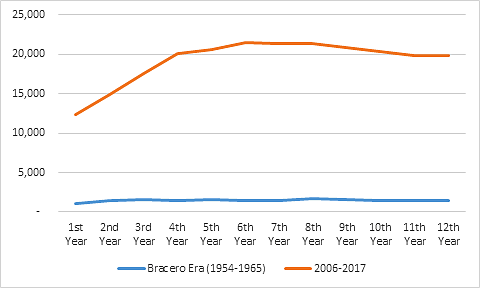 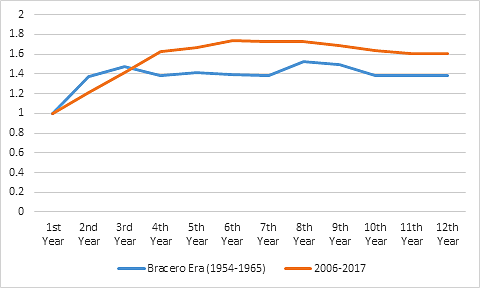 These two periods are not perfectly comparable. The decline in border apprehensions since 2006 was aided by the housing market collapse, the Great Recession, the 61 percent increase in the number of border patrol agents, the relative demographic decline in Mexico, numerous state-level laws immigration enforcement laws, Secure Communities, and the increase in interior deportations under Presidents Bush and Obama. The Bracero Era collapse in illegal immigration occurred during an expanding domestic economy, a 38 percent increase in the number of border patrol agents, accelerating Mexican fertility, and a fiercely named but relatively moderate interior immigration enforcement scheme that also legalized many illegal workers. Although imperfectly comparable, many natural, political, and macroeconomic factors conspired to lower illegal immigration since 2006 while most of those factors pushed in the opposite direction during the Bracero Era--providing further evidence that Bracero was more effective than enforcement-only.

The Bracero Era's immigration enforcement policy was called “Operation Wetback,” a nasty immigration enforcement operation begun in 1954 that removed almost two million illegal Mexican migrants. While brutal and unnecessary, many of the migrants rounded up under Operation Wetback were legalized on the spot, a process derogatorily referred to as “drying out” illegal migrant workers, and given a Bracero work visa. The number of migrants “dried out” is not well recorded but 96,239 were processed thusly in 1950. The Department of Labor actually preferred legalized illegal migrants over newly-admitted Braceros. Other apprehended illegal immigrants were made to “walk around the statute”--basically taking a single step into Mexico and then returning under the watchful eye of a border patrol agent who then handed him a work visa and drove him back to his farm. The government did not tolerate illegal immigration but they made it simple for migrants to get a guest worker visa and used the border patrol to funnel the migrants into the legal system. Many border patrol agents and other officials testified to what a success Bracero was in reducing illegal immigration.

The main goal of modern immigration policy is to end illegal immigration. The government should choose the cheapest way to accomplish that task--which is by expanding guest worker visas. Border patrol agents and walls are expensive, they decrease economic growth, and have never completely stopped illegal immigration. Guest worker visas are cheap, they increase economic growth, and they reduced illegal immigration far more rapidly and effectively than the modern enforcement-only method. If it was easier for would-be illegal immigrants to instead earn a legal work visa similar to Bracero then almost all future and current illegal immigrants could be funneled into the legal market without increased enforcement. This was the policy followed in the Bracero Era and it worked quicker, more efficiently, more completely, and more cheaply than the modern enforcement-only approach.

If the Trump administration really wants to end illegal immigration then they should copy Eisenhower’s policy of enforcement and liberalization toward guest worker visas rather than Obama’s enforcement-only approach.