How Many Americans Get Subsidies?

This year is an extraordinary one for government subsidies. More than 150 million people received $1,200 stimulus checks. More than 25 million people have been receiving the $600 a week boost in unemployment benefits. Almost five million businesses and nonprofits have received aid through the PPP program. All this and other recession‐​related spending is imposing trillions of dollars of debt—and ultimately taxes—on younger working Americans.

Even during normal times, many Americans are hooked on federal payments of one type or another. The chart below shows the number of recipients of some major subsidy and benefit programs. As a point of reference, there are about 129 million households in the nation.

The data comes from Table 21–3 in the federal budget here. Some of the items are contractual obligations (such as employee pensions and payments to veterans), but most of the items are subsidies that can be, and should be, cut or repealed to fix our massive federal debt problem.

Aside from these programs, there are 2,000 or more other federal subsidy programs for state and local governments, businesses, nonprofits, and individuals. (These are described in a 3,709-page pdf available here). Over the decades, both the size and scope of federal subsidies has expanded, attaching ever more individuals and organizations to the government’s teats. Each program undermines the private economy, generates a bureaucracy, and spawns a web of regulations that micromanage society and reduce freedom.

There is concern about declining free speech in America, and government handouts add to the problem. Individuals and organizations that get hooked on subsidies essentially become tools of the state. They lose their independence and may shy away from criticizing the government and its many failures.

When the economy recovers from the current crisis, policymakers should turn their attention to cutting subsidies and freeing the nation from top‐​down cash and controls from Washington. 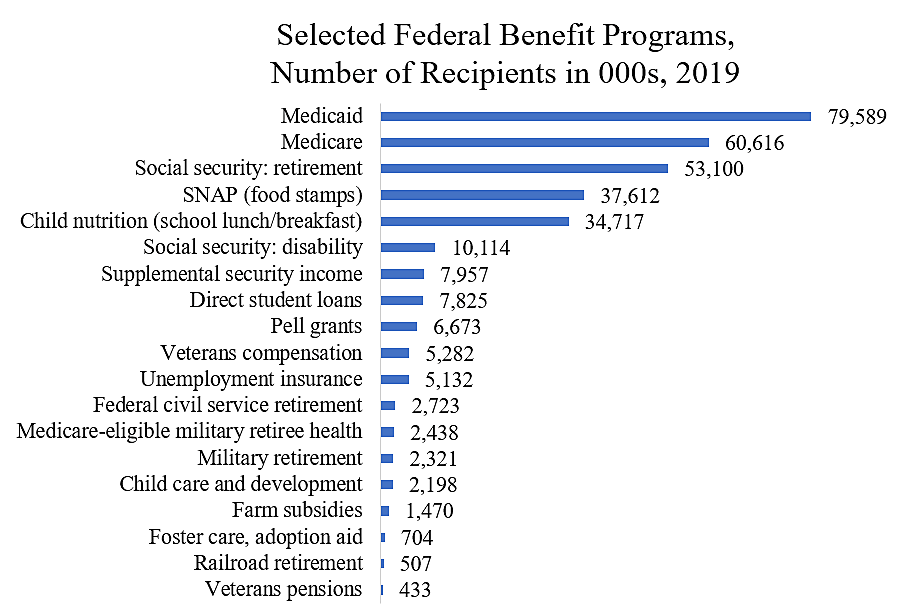 The figure for Medicare is for HI benefits.