How Long Is the TPP Going to Take?

We were once told that the Trans‐​Pacific Partnership would be completed by the end of 2013. Then it was early 2014, then late 2014, or probably sometime before 2015, or in early 2015 for sure. At this point, only two things are certain: you shouldn’t believe any predictions about the TPP, and the TPP is taking a really, really long time.


To get an idea for how long the TPP is taking, consider this graph put out by the Peterson Institute earlier this month showing the negotiation and ratification times for previous free trade agreements: 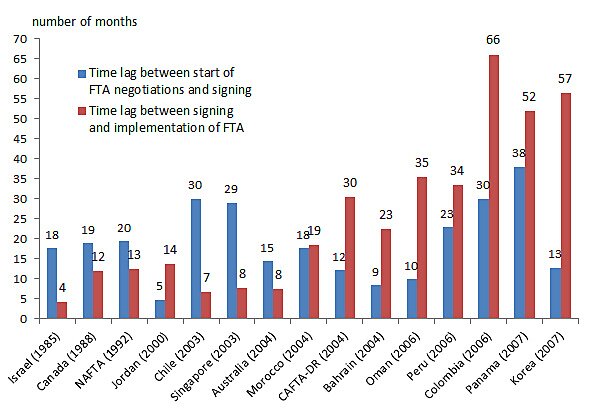 The argument they’re trying to make with this graph is that the United States needs to pass trade promotion authority to make sure the TPP doesn’t get bogged down in Congress (the red line) after negotiations finally conclude. They may be right, but I think it also tells us quite plainly that quick ratification of the TPP, with or without trade promotion authority, is an unrealistic expectation.


Here’s the same data presented with the negotiation and ratification times stacked on top of each other and with the current progress of the TPP (and TTIP) included: 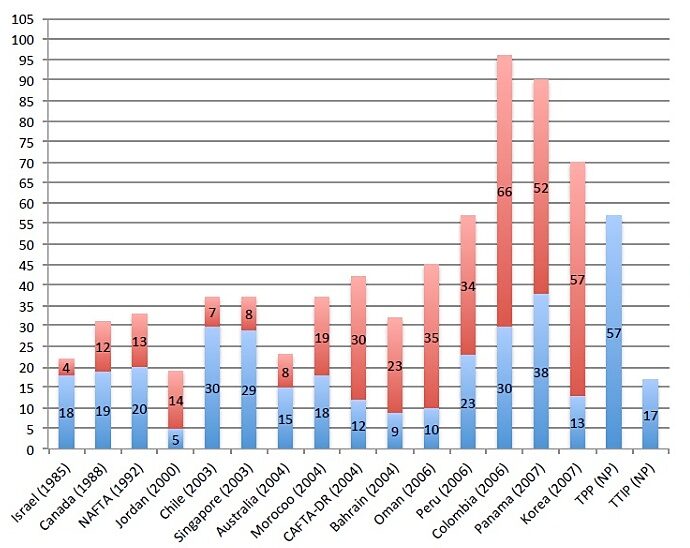 As you can see, the TPP negotiations are taking an unprecedentedly long time to complete.


Undaunted by the failure of previous predictions, the U.S. Trade Representative is now claiming that the negotiations will conclude and the whole deal can be passed by Congress before the end of 2015. That would be an impressively abrupt end to a long project, with a blue and red line total of just under 70 months.


It seems more likely, however, that the TPP is a trade policy quagmire the United States entered into with overly ambitious goals and inadequate resolve to see them met. There’s a lot more than just the lack of trade promotion authority keeping the TPP negotiations from concluding. And you might notice from the graph above that, even with trade promotion authority in place, the most recent trade agreements lingered in Congress for a very long time after the negotiations were completed.


Maybe I’m wrong. Maybe the stars are about to align for the TPP. But if I’m right, how long do we have to wait before we rethink our strategy?