How to Improve Thanksgiving Air Travel

Millions of Americans will deal with the hassles of air travel this week as they join their families for Thanksgiving. Airports are crowded, flights get delayed, and travelers get stuck in long security lines. Things may get worse as aviation demand rises and puts even more strain on the system. The chart below shows total annual U.S. airline passengers on scheduled flights.

In most industries, businesses respond to rising demand by investing in new capacity. But in aviation, major parts of the industry—security screening, airports, and air traffic control—are run by the government, an institution not known for investing efficiently. The solution is to privatize all these aviation infrastructure activities, which is the successful approach taken by Canada and numerous European countries.

U.S. airport screening is run by the unionized Transportation Security Administration, which has a reputation for intrusive pat downs and inept management. Former TSA chief Kip Hawley called the agency “hopelessly bureaucratic.” Studies in the past found that TSA screening performance is no better, and possibly worse, than private‐​sector screening, which is allowed at some U.S. airports. The TSA has a habit of wasting money on useless activities, leaving it less to invest on things that benefit travelers, such as more screening stations.

Congress should move responsibility for screening to the airports and allow them to contract out to expert security firms. Private firms would be able to flexibly adjust their workforces to reduce congestion, and they would end low‐​value procedures that waste traveler time.

Another barrier to aviation efficiency is that all U.S. commercial airports are owned by governments. Federal funding for “airport improvements is provided in a highly politicized manner with little regard for return on investment,” noted the Eno Center. At the same time, the federal government restricts airports from raising fees to fund their own improvements.

The current funding system, which relies on politicians, makes no sense. If airports were privatized—as they have been in many other nations—they could access funding from customer charges, advertising, and debt and equity to invest in new facilities and meet rising demands.

Air traffic control also suffers under government ownership. ATC is a complex, dynamic, high‐​tech business, and yet we run it as a D.C. bureaucracy. The Federal Aviation Administration’s record on technology upgrades has been poor. It is moving ahead with NextGen, a series of projects to bring GPS and digital communications into air traffic management. But upgrades have been delayed because of FAA mismanagement and inefficient federal funding. The airline trade association discussed FAA reforms in this recent testimony.

The solution is privatization. In Canada the ATC system is run by the nonprofit corporation Nav Canada, after being privatized in 1996. The reform is a big success. Nav Canada has an excellent safety record, is a leader in technology, and has won international awards for performance. The Canadian system would be a great model for U.S. reforms.

America was the global leader in 20th century aviation, but today we risk falling behind. To meet growing passenger demand and improve the public’s flying experience, policymakers should adopt the best practices of 21st century aviation, including privatizing security screening, airports, and air traffic control. 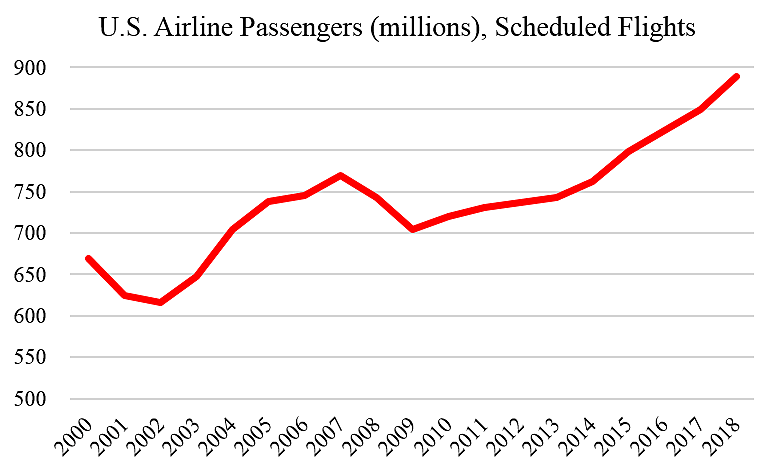 Chart data from here and here.