How I‐​Squared Would Affect Employment Based Green Cards

Senator Orrin Hatch (R-UT) introduced the I-Squared Act of 2015 to reform the high-skilled immigration system.  Most of this bill attempts to improve the H-1B visa for temporary highly skilled workers by making the workers more legally mobile and increasing the quotas for that visa.  The H-1B is a dual-intent guest worker visa program, meaning that workers on the H-1B can pursue a green card while working on a temporary visa. The H-1B is a pipeline to the employment-based (EB) green card.

Most commentators will focus on the important and positive proposed reforms to the H-1B visa.  In contrast, I will focus on the reforms to the employment-based (EB) green card program.  I-Squared would exempt several categories of workers and their family members from the numerical quota imposed on EB green cards.  Although I-Squared does not increase the numerical quota, effectively it more than doubles the quota through exemptions.  As I detail here, this is a very positive move for U.S. economic growth.  Below I detail many of the exemptions in I-Squared and then make some suggestions for further streamlining and liberalizing the system.

The most important exemption in I-Squared for EB green cards is for the spouses and children of workers.  Under current statutory interpretation, the family members of these workers count against the quota. Fifty-five percent of those who received the EB green card were the spouses and children of workers in 2013.  Allowing those spots to instead be filled with workers would more than double their number going forward. 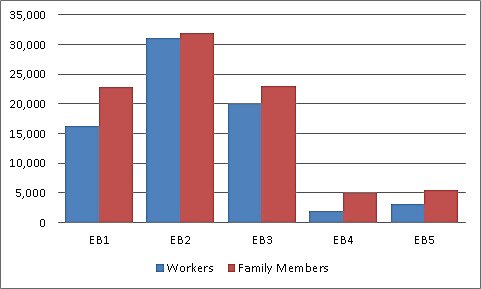 The second major exemption in I-Squared is for immigrants who earned a STEM masters degrees or doctorates from American universities.  According to the National Science Foundation, there are roughly 2.1 million foreign-born scientists and engineers employed in the United States who have an advanced degree.  Two-thirds of them completed their highest degree in the United States.  The United States is already an attractive place to work and attend university.  I-Squared will make it much more attractive by increasing the economic benefits of being educated here in those subjects by making green cards more attainable.  Ideally, those educated, trained, or in-demand for other university subjects and occupations should also be allowed to stay, but liberalizing the STEM fields is better than nothing.

Workers with extraordinary ability and outstanding professors or researchers are part of the first preference category for EB green cards.  I-Squared exempts them all from the numerical quota.  In 2013, there were 4,064 workers in the extraordinary ability category and 3,117 outstanding professors and researchers who were granted a green card.  While this is a relatively small numerical exemption, it will free-up more green card spaces for other highly skilled workers and encourage more immigrants with those extraordinary and outstandaing abilities to come.

The above reforms in I-Squared will greatly improve the system if they become law.  However, other reforms should be undertaken to increase the economic benefits of skilled immigration.

2013 Adjustment of Status and New Arrivals for EB Green Cards 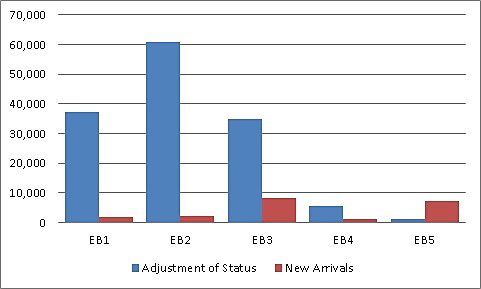 The other portions of I-Squared, such as allowing F visas to be dual intent, recapturing unused EB green cards from previous years, and eliminating the per-country quotas are all great improvements.  This bill represents a good first step toward reforming the high-skilled immigration system.

If I-Squared were to become law and foreign STEM graduates could easily earn a green card, the United States would become an even more attractive place for international students to pursue those degrees as well as contribute to our economy.  Furthermore, the increase in H-1B visas would create a bigger pipeline of potential future workers eligible for EB green cards under the expanded system.  If I-Squared becomes law, it could substantially change American immigration policy to favor highly skilled immigrants without diminishing family-based immigration.