How to Fix County Budget Problems

I’m wrapping up a paper on the real cost of public education, the total price tag per student, not just the stripped down version they typically trot out to show voters. One of the districts is Arlington, VA, which is the one I happen to live in.


Though the district is an unusually big spender, their most recent budget, for fiscal year 2010, contains hand‐​wringing typical for school districts across the country. “FY 2010 will present unique challenges and hardships for staff, however as stated earlier, these reductions are taken so that there is minimal impact on classroom instruction.”


Arlington is planning to spend over $23,000 per student this year according to the Washington Area Boards of Education (WABE). That’s a 33 percent increase in constant dollars since 2000.* 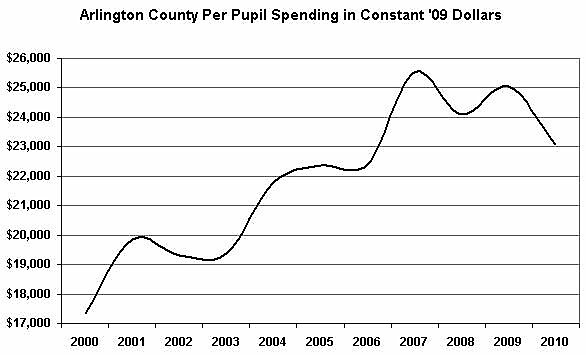 And yet the county is still talking about tax increases to cover the expected $80-$100 million shortfall the county expects next year.


Here’s a great alternative; fund the schools at 2000 levels and we’re left with an extra $108 million. Voila, no tax increases!


* The WABE listed per‐​pupil figure leaves out some k‐​12 spending and provides a number that is significantly less than that in more comprehensive, but older, state records or that can be compiled from district budgets, so I’ve divided the total expenditures listed on p.23 by the enrollment to get real total per‐​pupil spending.