Many Americans are curious about the impact of immigration on the wages of other Americans.  The best research on this focuses on the period between 1990 and 2006, when almost 17 million people immigrated to the U.S. lawfully and a net 12 million came unlawfully.  The first major study is by Borjas and Katz (B&K) and the second is by Ottaviano and Peri (O&P).  O&P borrowed much of B&K’s methodology.  Here are the long run findings:

B&K draw a more negative conclusion than O&P.  The main differences are that O&P assume capital adjusts quicker to increased labor abundance and immigrants are more complementary.  B&K’s paper reflects their assumptions about native-immigrant substitutability.  Since immigrants are more likely to have less than a high school degree and more likely to have a graduate or professional degree than natives, B&K’s model assumes natives in those categories are competing with immigrants for jobs and therefore experience wage declines.

Both O&P and B&K found that increased immigration has a larger affect on immigrants than natives.  Depending on their level of education, longer settled immigrants experience greater wage declines and smaller wage gains from more recent immigration compared to natives: 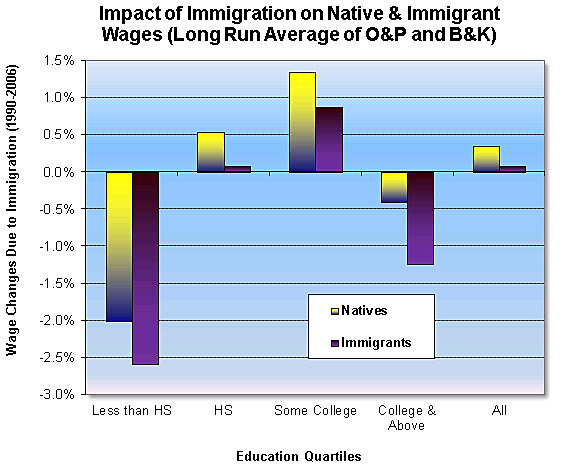 Both sets of authors rightly assume that more recent waves of immigrants are most similar to immigrants from older waves, making the two arrival cohorts of immigrants substitutes in the workplace.  Recent papers by Ethan Lewis and Giovanni Peri and Sparber make convincing argument that language ability of recent immigrants makes them more similar and, thus, substitutable with previous waves of immigrants.  Language ability also makes immigrants complements to natives, partly explaining why O&P and B&K found wage increases for so many American workers as a result of immigration.

Here is a comparison of the long run wages effects on immigrants and natives from the O&P and B&K study: 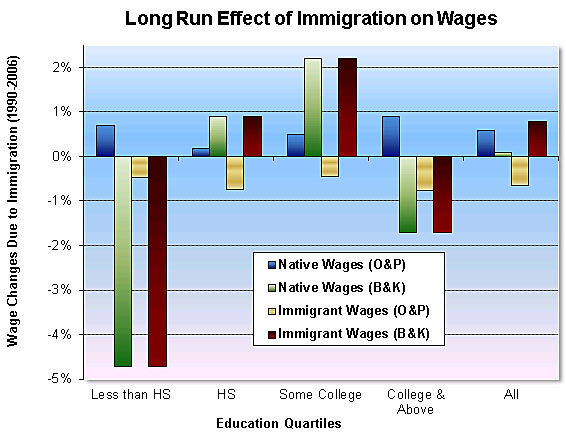 These charts merely explain the results of previous waves of immigration on the American labor market.  If immigration increases in the future these numbers will likely be different but the past is always a useful guide for anticipating the effects of future policy changes.

Borjas, George, “The Labor Demand Curve Is Downward Sloping: Reexamining the Impact of Immigration on the Labor Market.”

Borjas, George and Lawrence Katz, “The Evolution of the Mexican-Born Workforce in the United States.”

Ottaviano, Gianmarco and Giovanni Peri, “Immigration and National Wages: Clarifying the Theory and the Empirics.”