How Big Were the Bush Tax Cuts?

The debate on extending the Bush tax cuts has begun. Those opposed to extension argue that the cuts would greatly increase the federal deficit.


The first thing to note is that extending all the 2001 and 2003 tax cuts would lose the government about $216 billion a year in 2012 and rising amounts after that (see page 16). By contrast, federal spending in 2011 will be almost $2 trillion higher than in 2001 when the first Bush tax cuts were passed. Thus, in a rough sense, spending increases have had a nine times greater impact on our changed budget situation since 2001 than have tax cuts.


How big were the Bush tax cuts compared to previous tax legislation? One way to compare different tax bills is to look at the initial projections of the effects when they were passed. I assembled the figure below based on official scores of past tax legislation, as reported by the CBO at the time. The revenue effects of each tax bill are measured over the first five years as a share of GDP.


The figure shows that the Bush tax cuts were small compared to the Reagan tax cuts of 1981. The Revenue Act of 1978 was also a big tax cut. Note that the Tax Reform Act of 1986 was scored as being revenue neutral, and thus isn’t shown.


The figure also shows that the combined effect of tax cuts from 1997 forward were not large enough to offset the tax hikes under Reagan and the first Bush between 1982 and 1993.


I have a detailed discussion of federal tax policy between 1994 and 2004, here. 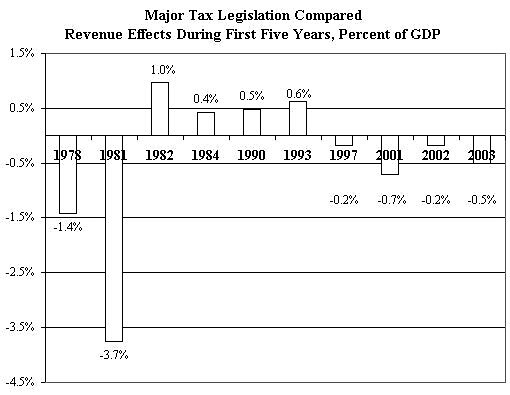