Housing prices have soared in many U.S. and international cities, which has generated affordability problems for middle‐ and lower‐​income families. An article in the Wall Street Journal today by Laura Kusisto and Peter Grant notes, “Across 32 major cities around the world, real home prices on average grew 24% over the last five years.”


Kusisto and Grant imply that the blame should be shared: “Governments haven’t had the money to subsidize new supply … The private sector has also fallen short.” And they say, “But no approach has solved the crises and most have other negative ripple effects.”


But then the reporters undercut their own narratives with news about Tokyo:

But one major city has had stable housing prices as a result of pumping out housing supply to keep up with rising demand.


Tokyo is one of the few cities in which supply has kept up with demand, keeping a crisis from developing. But that is due largely to deregulated housing policies that other countries would have a hard time reproducing.


“It goes against the notion of planning and developing cities in an orderly fashion,” said Laurence Troy, research fellow at the City Futures Research Centre of the University of New South Wales, Australia.

So maybe the idea of imposing top‐​down “order” is harmful. If the government gets out of the way, businesses can invest, supply will increase, and prices will be restrained.


Not only will supply increase, but Kusisto and Grant report that businesses in deregulated markets respond to the high‐​price problem by innovating to cut construction costs. Thus, the private sector is not “falling short” in places where it is allowed to work its magic.


On the next page in the Journal today, River Davis reiterates these points in her report on Tokyo’s relatively free housing markets:

In the past two decades, home prices in some leading North American and European cities have skyrocketed. In Tokyo, however, they’ve flatlined.


So why no affordable‐​housing crisis in Japan? A big factor, experts say, is the country’s relatively deregulated housing policies, which have allowed housing supply to keep up with demand in the 21st century.


With no rent controls and fewer restrictions on height and density, Tokyo appears to be a city where the market is under control—where supply is keeping home prices from rising as drastically as they have in many other major world cities.


… Japan’s current level of housing supply is tied to a package of policy changes—implemented around the turn of the century—that were aimed at restoring the profitability of Japan’s land‐​development industry, according to Andre Sorensen, a professor of urban geography and a Japan housing expert at the University of Toronto Scarborough.


The Japanese government began relaxing regulations that had restricted supply, allowing taller and denser buildings in Japan’s capital. Private consultants were given permission to issue building permits to speed up construction. “This created something like a free‐​trade zone in Tokyo,” Mr. Sorensen said.

With deregulation has come business innovation, which has further restrained prices:

Two of Japan’s largest housing construction companies, Daiwa House Industry Co. and Sekisui House Ltd, both say that the easing of land and construction regulations has helped them build in Tokyo. The companies say that deregulation has benefited them particularly in their ability to expand housing units by replacing low‐​rise residential complexes with much higher ones.


To deal with rising construction fees, Mr. Ariyoshi says Japan may have to rely more on prefabricated homes to provide affordable housing. He estimates that about 20% of the country’s homes are already being assembled in increasingly automated factories. 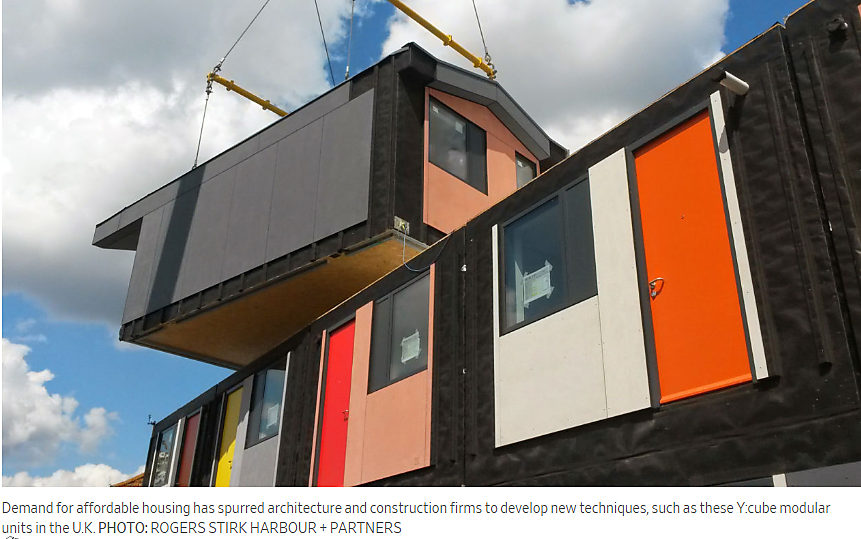