Hong Kong Needs to Leverage Its Free Market in Ideas

The massive demonstrations in Hong Kong against the proposed extradition bill revealed the moral rectitude of citizens to protect their way of life and freedom from Communist China.  On June 9, hundreds of thousands of individuals exercised their right to peacefully contest the extradition legislation supported by Chief Executive Carrie Lam.  By putting moral and political pressure on government officials, the people succeeded in reversing the course of the bill, which was suspended on June 15 and declared “dead” on July 9.      Yet the bill has not been fully withdrawn and could be reintroduced in the future—and the protests continue. 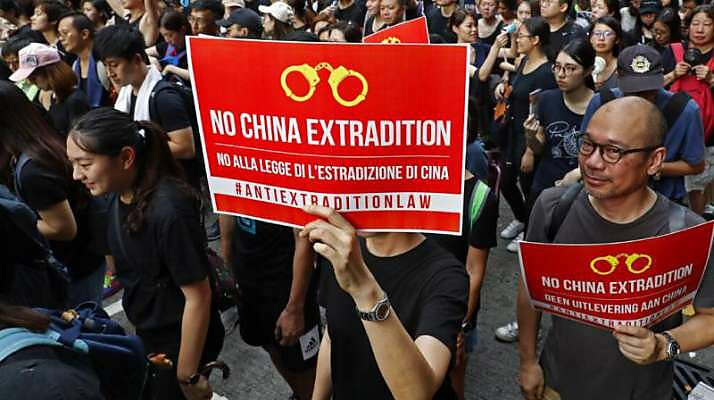 Protesters are concerned that, if a bill allowing extradition to the Mainland were enacted, Hong Kong would risk losing its unique status as a guardian of the rule of law, limited government, economic freedom, and human rights. The possibility of being convicted of a crime against the Mainland, extradited, and subjected to China’s draconian penal system would increase uncertainty and result in self-censorship— undermining the free market in ideas that is Hong Kong’s trademark. The resulting outflow of human and financial capital would have dire consequences for both Hong Kong and China.

It was to protect their way of life that the protesters marched and stopped the pulse of everyday life in the world’s freest economy.  But on June 12, the protests turned violent as a small minority broke into the Legislative Council’s building, clashed with police, and called for immediate withdrawal of the bill and the ouster of the chief executive.  More recently, protesters have defaced the Chinese national emblem and thugs have beaten pro-democracy demonstrators.

One protester, 29-year-old Sandy Chan, expressed the sentiment behind the protest movement by saying, “protesting is the only way we can make our voices heard in the absence of democracy.”  It would have been more correct to say “one of the few ways” because, unlike the People’s Republic of China (PRC), Hong Kong has a genuine rule of law that respects basic human rights.  Article 27 of the Basic Law, which was promulgated in 1997, states: “Hong Kong residents shall have freedom of speech, of the press and of publication; freedom of association, of assembly, of procession and of demonstration.”

Other protected rights include:

Those freedoms are not granted by the state; they pre-exist government and are the natural rights of all citizens. The grounding of rights in individuals, not the state, contrasts sharply with the top-down approach to rights in China, where basic rights stated in the PRC Constitution are merely “paper rights” and the rule of law is a rule designed to “build socialism”—not a meta-legal principle to defend life, liberty, and property.[i] That is why ethnic Chinese in Hong Kong mostly see themselves as “Hong Kongers,” with only 11 percent identifying themselves as “Chinese”—that is, as national citizens of the PRC (see Cheung and Hughes, BBC News, 2019: 4).

Yet, the “one country, two systems” doctrine embedded in the Basic Law will end in 2047, only an instant in China’s long history.  What happens in the next 28 years will define the future of Hong Kong.  If Hong Kong can export its system of limited government and individual freedom to the Mainland—by showing that a free market in ideas is far superior to “socialism with Chinese characteristics”—then there is hope that China may eventually move from a model based on “building socialism” to one that recognizes the principle of spontaneous order[ii] under what F. A. Hayek called a “constitution of liberty.”

Unlike the Mainland, everyone in Hong Kong has a voice in a free market for ideas and an opportunity to criticize the state, including Beijing.  The evils of the 1989 Tiananmen crackdown have not been forgotten as Hong Kongers gather each year to commemorate all those who lost their lives fighting for freedom and democracy.

To maintain their own freedom and move toward democracy, the Hong Kong people need to leverage the free market in ideas.  The moral force of the voices of freedom and limited government should not be underestimated. Just as free trade in goods and services increases the wealth of a nation so does free trade in ideas.

Social media has been widely used to “spontaneously” organize the protests.  But when young demonstrators like Sandy Chan think that taking to the streets is the “only way” to make their voices heard, they risk taking a tactical approach to reform that could backfire as protests become violent or disruptive.

What is needed is a long-run strategy that relies on the strength of Hong Kong’s ethos of liberty and adherence to limited government, which is even more important than democratic rule. As Hayek has noted, “The benefits of freedom are . . . not confined to the free”—“unfree societies benefit from what they obtain and learn from free societies” (The Constitution of Liberty, 1960: 32). China has certainly benefited from allowing Hong Kong to maintain its free-market trading system since 1997, and that system could not have survived without a corresponding free market in ideas.

In December 2003, Premier Wen Jiabo expressed optimism regarding China’s future and argued that, in “building socialism with Chinese characteristics,” Beijing needs to “respect and protect the freedom of the Chinese people to pursue happiness.”  The means to attain that end, however, are better supplied by Hong Kong’s open society than by China’s repressive system.

Sandy Chan and other protesters need to recognize that Hong Kong’s institutional infrastructure, characterized by limited government and a genuine rule of law, gives them great moral leverage over Beijing. If the youth in Hong Kong are to win the war of ideas, they need to have a firm grasp of the uniqueness and power of the ideas underlying Hong Kong’s success—namely, that individual rights to life, liberty, and property are sacred, and that the only legitimate role of government is to protect those rights.

The protests against the extradition bill have succeeded in killing the legislation for now, and Hong Kong leaders who favored the bill have lost face—but not their official status.  Without competitive, free elections, Hong Kongers are handicapped but not totally ineffective in shaping the political landscape and confronting Beijing with the stark reality of two systems: one in which there is still a free market in ideas and the other in which a “president for life” is intent on suppressing all criticism.

One of China’s best-known reformers, Professor Wu Jinglian, has argued that “only by matching the rule of law with the market economy can we achieve total success.” But while the Chinese Communist Party (CCP) has pledged to “further emancipate the mind” and President Xi, in his October 2017 report at the CCP’s 19th National Congress, advocated following “the principle of letting a hundred flowers bloom and a hundred schools of thought contend,” those promises remain empty in a system where dissent is outlawed by a powerful one-party state (see Dorn, 2019: 173–74).

To win the war of ideas, Hong Kong needs to remain an open society and fight the Mainland—and those who sympathize with Beijing—with ideas. Key to that battle is the idea that limited government and a free market in ideas are better means to enable individuals to pursue happiness than state control.

[i]  The PRC Constitution contains “a general defeasance clause” (Article 51), which states: “Citizens of the People’s Republic of China, in exercising their freedoms and rights, may not infringe upon the interests of the state, of society, or of the collective.”  As my colleague Roger Pilon has noted, this means that “any claims that individuals might have against the state can always be trumped as a matter of constitutional law” (in Dorn, 1998: 336).

[ii] J. M. Buchanan has called the “principle of spontaneous order” the “most important central principle in economics” (Buchanan 1979, “General Implications of Subjectivism in Economics,” in H. G. Brennan and R. D. Tollison, eds., What Should Economists Do? Indianapolis: Liberty Press). The idea that a harmonious economic and social order can emerge spontaneously from individual action—provided government enforces just rules that protect individual rights to life, liberty, and property—is central both to liberalism and to the case for limited government. As Hayek (1967: 162) states, “Under the enforcement of universal rules of just conduct, protecting a recognizable private domain of individuals, a spontaneous order of human activities of much greater complexity will form itself than could ever be produced by deliberate arrangement, and . . . in consequence the coercive activities of government should be limited to the enforcement of such rules” (“The Principles of a Liberal Social Order,” in Studies in Philosophy, Politics, and Economics, Chicago: University of Chicago Press). See Dorn, “The Primacy of Property in a Liberal Constitutional Order.”