Highways and the Federal Gas Tax

Another day, another news article supportive of raising the federal gas tax. This time it’s the Wall Street Journal. The article notes that there is strong public opposition to raising gas taxes, but then proceeds to give us the arguments in favor of it, but none against. So for the next reporter writing about raising the gas tax, here are some policy reasons against it.

Let me zero in on two points made by the Journal story.

First, it says, “elected officials from both parties are treading into the debate cautiously, framing the issue around improving highway safety and local economies by repairing a growing backlog of troubled roads and bridges.”

I don’t think that’s true about a “growing backlog.” In fact, our highways and bridges appear to be improving, not getting more “troubled.” Federal Highway Administration (FHWA) data show that of the nation’s 600,000 bridges, the share that is “structurally deficient” has fallen from 22 percent in 1992 to 10 percent in 2013. The share that is “functionally obsolete” has also fallen.

Meanwhile, the surface quality of the interstate highways has steadily improved. A study by Federal Reserve economists examining FHWA data found that “since the mid-1990s, our nation’s interstate highways have become indisputably smoother and less deteriorated.” And they concluded that the Interstate system is “in good shape relative to its past condition.”

The Journal says, “The federal levy ... has stood at 18.4 cents a gallon since the first year of the Clinton administration, despite multiple proposals over the years to raise it. Over the past decade, Congress has approved higher spending for highway construction but hasn’t raised the tax to pay for it, creating periodic funding crises.”

Gas tax supporters say that it is time to raise the tax because it has not been raised in two decades. What they leave out of the story is that the gas tax rate more than quadrupled between 1982 and 1994 from 4 cents per gallon to 18.4 cents, as shown in the chart below the jump. Thus, looking at the whole period since 1982, federal gas tax revenues have risen at a robust annual average rate of 6.1 percent (based on Tax Foundation data). So, again, we have a spending crisis, not a funding crisis. 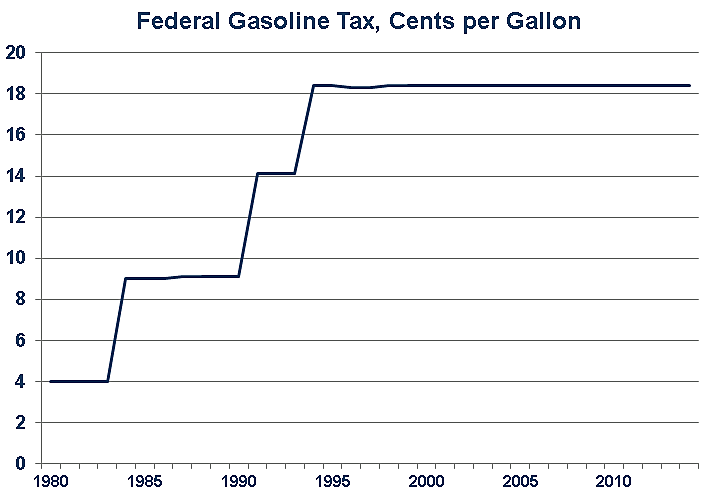