Here is the first paragraph of an Associated Press story about the new House highway bill:

Despite years of warnings that the nation's roads, bridges and transit systems are falling apart and will bring nightmarish congestion, the House on Thursday passed a six-year transportation bill that maintains the spending status quo.

Yet some of the government’s own data—as I cite here—shows that, rather than “falling apart,” the nation’s bridges and Interstate highways have steadily improved in quality over the past two decades.

I wish reporters would explore the data themselves, rather than just parroting what the transportation lobby groups say. I also wish they would use their imaginations a bit and realize that if bridges and highways were actually nightmarish and falling apart, then state and local governments—who own the bridges and highways—have the responsibility and full capability of fixing them themselves.

As for the “spending status quo,” that status quo has included steady increases over the past two decades. The chart shows total highway trust fund spending using Federal Highway Administration data for 1990 to 2014, and the Congressional Budget Office baseline projection for 2015 to 2021. The new House highway bill would spend this baseline amount over the next six years, while the Senate bill would spend somewhat more. 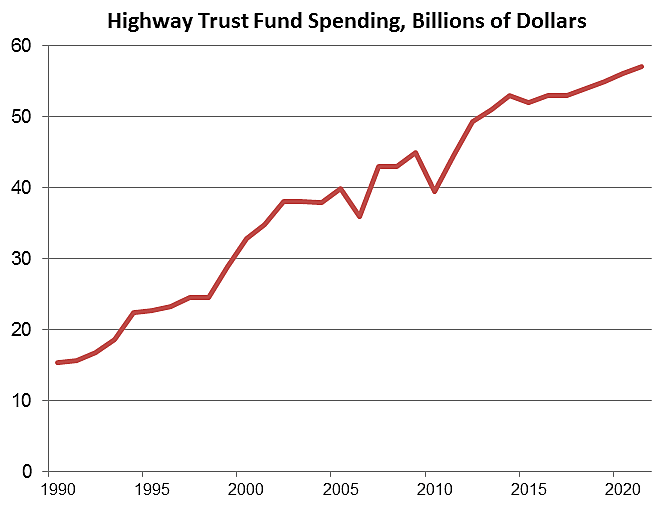