For the second year in a row, the Department of Health and Human Services (HHS) estimates that enrollment in the health insurance exchanges will come in far below earlier projections from the Congressional Budget Office (CBO).

According to the research brief released yesterday, HHS estimates that effectuated enrollment, or enrolled and paying premiums, will be in the range of 9.4 to 11.4 million at the end of 2016. In a conference call with reporters HHS Secretary Burwell said she believes “10 million is a strong and realistic goal… our target assumes something that is probably pretty challenging, which is that more than one out of every four of the eligible uninsured will select plans.” Effectuated enrollment of 10 million for 2016 would be an increase of only 900,000 over the department’s estimate for this year. The department now projects exchange enrollment to stagnate in the same year CBO estimated that average effectuated enrollment would almost double to 21 million. Part of this is due to a slower than expected shift from employer-sponsored insurance, but also due to difficulties in reaching some segments of the uninsured population.

People in the individual market could find themselves between a rock and a hard place next year. Uninsured people not covered by one of the exemptions from the individual mandate are forced to pay a penalty, and it is scheduled to increase significantly next year.

While people will face stiffer penalties for failing to buy health insurance, significant premium increases in many states mean they will likely end up paying a lot even if they do comply with the mandate. Some people may be able to minimize their increase by shopping around, but one report estimates a national weighted average premium increase around 13 percent, with some states like Minnesota seeing increases higher than 41 percent.

Stagnant enrollment could have adverse effects for premium increases and subsidy expenditures in the future. Around 87 percent of exchange enrollees receive subsidies, so far the exchanges have mostly succeeded in enrolling people who do not bear the financial burden of that enrollment because the government is subsidizing them. A recent study by Avalere found that the exchanges have had trouble attracting higher income enrollees: only 20 percent of the eligible people between 200 and 250 percent of the federal poverty level enrolled compared to 76 percent for those between 100 and 150 percent. 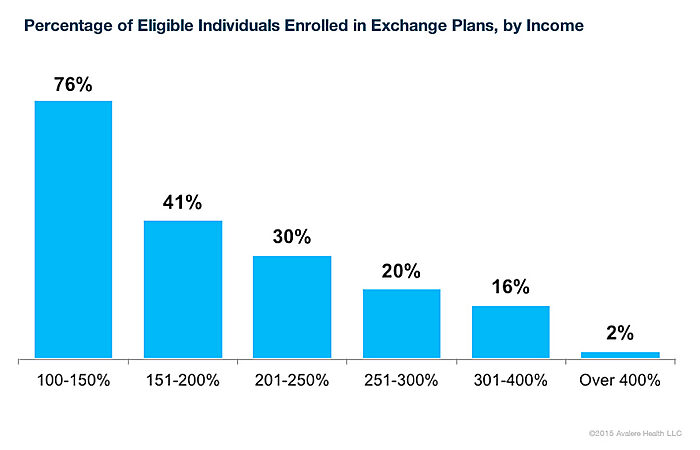 Other studies have found that the earliest exchange enrollees “were older and used more medication than older enrollees.” Younger, healthier workers could be deterred from enrolling in the future, which could skew the risk pools and lead to higher premiums.

It would be surprising to see these minimal enrollment gains and only a quarter of the remaining uninsured enrolling in the exchange if the ACA was the unambiguous victory its supporters claim, but there are substantial, structural problems with the law. These flaws are part of the reason the ACA was unpopular when it was passed and remains unpopular today. One recent average of polls showed 48.4 percent of people opposed the law compared to 40.2 percent supporting it.

Exchange enrollment will be relatively flat going into next year, at the same time people will be hit by higher penalties or premiums. These factors, along with the persistent unpopularity of the law, reveal that there is still an opportunity for an alternative to the ACA, one with less emphasis on government intervention and more room for free markets.