Have Mexican Dishwashers Brought California to Its Knees? 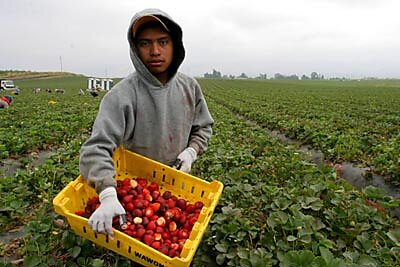 An article published this week by National Review magazine blames the many problems of California on—take a guess—high taxes, over‐​regulation of business, runaway state spending, an expansive welfare state? Try none of the above. The article, by Alex Alexiev of the Hudson Institute, puts the blame on the backs of low‐​skilled, illegal immigrants from Mexico and the federal government for not keeping them out.


Titled “Catching Up to Mexico: Illegal immigration is depleting California’s human capital and ravaging its economy,” the article endorses high‐​skilled immigration to the state while rejecting the influx of “the poorly educated, the unskilled, and the illiterate” immigrants that enter illegally from Mexico and elsewhere in Latin America.


One, if low‐​skilled, illegal immigration is the single greatest cause of California’s woes, how does the author explain the relative success of Texas? As a survey in the July 11 issue of The Economist magazine explained, smaller‐​government Texas has avoided many of the problems of California while outperforming most of the rest of the country in job creation and economic growth. And Texas has managed to do this with an illegal immigrant population that rivals California’s as a share of its population.


Two, low‐​skilled immigrants actually enhance the human capital of native‐​born Americans by allowing us to move up the occupational ladder to jobs that are more productive and better paying. In a new study from the Cato Institute, titled “Restriction or Legalization? Measuring the Economic Benefits of Immigration Reform,” this phenomenon is called the “occupational mix effect” and it translates into tens of billions of dollars of benefits to U.S. households.


That is a quarter of a trillion dollar difference between following the policy advice of National Review and that of the Cato Institute. Last time I checked, that is still real money, even in Washington.