Has Obama Lost the Confidence of Black Citizens on Education Reform?

Polls consistently indicate that President Obama has lost proportionally more ground on job approval with white and Hispanic than with black Americans.


But data from question‐​experiments within the yearly Education Next/​Harvard poll suggest the opposite in regard to Obama’s influence on education policy opinions. Obama’s policy influence with black respondents has dropped significantly more than it has with respondents overall; Obama’s position on vouchers and merit pay has no impact on black opinion. 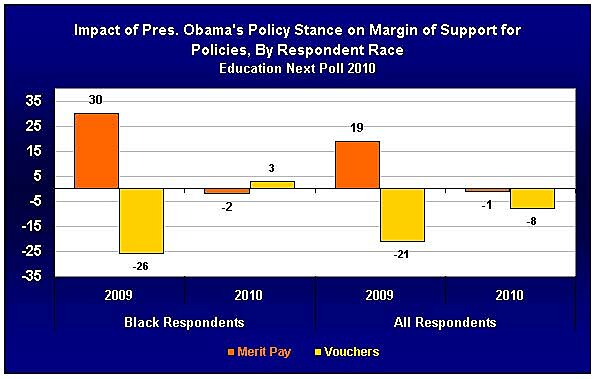 The number of black respondents is small (just 280), but no discernable impact?


The intersection of race and politics is a complicated place; a jumble of socio‐​economic, ideological, and Party differences. Black Americans are predominantly Democratic, are more liberal than the general population on many issues (although more conservative on some), and on average have lower incomes. All of these characteristics have a major impact on an individual’s political opinions, and they are highly correlated with race in America. What this confluence of correlations translates into is overwhelming support for Democratic Presidents in general and President Obama in particular; 88 percent approval compared to 54 percent from Hispanics and 38 percent from whites.


What’s going on behind these crosstabs? Does Obama’s policy endorsement no longer have an impact on Democrats in general? Why the disconnect between support for the President and his ability to move opinion on policy? Are we seeing through a race/​Party social‐​desirability impact here?