Harkin: Education Too Important Not to Mortgage Our Future 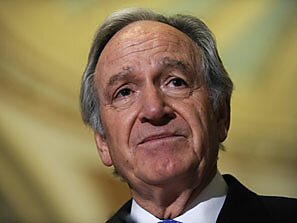 Yesterday, I wrote about a bill introduced by Sen. Tom Harkin (D-IA) that would allocate $23 billion to protect public schooling employment against the end of “stimulus” funding. I wrote that it appeared the stimulus would essentially set a new floor for education spending — as many had feared it would — not just be a one‐​time deal. It also seemed an utterly irresponsible expenditure given the nation’s almost unimaginable debt.


At a hearing on the measure yesterday, Harkin addressed the debt concern. Of course, he did it in the same way federal politicians have for years dealt with their spending the nation into oblivion. According to Inside Higher Ed, Harkin said the debt is a legitimate concern, but this particular issue is just too important to worry about it:

“We’re going to borrow from our kids and our grandkids to pay for this now? That shouldn’t be — we’re borrowing too much from our kids and grandkids,” Harkin said, channeling criticism he said he anticipated hearing. Harkin said he agreed with the overarching concern. But the fact that this money is targeted for education makes it different, he suggested. “How can you argue on the one hand that it’s okay for kids to borrow to go to college, but it’s not all right to borrow to make sure there’s a college for them to go to? That there are teachers in our high schools and grade schools to prepare these kids for the future? It seems to me if there’s one legitimate area where we can borrow from the future, it’s in education.”

Um, Senator, even if you think education is more important than utterly unsustainable debt, would you at least take a small moment to see if yet more spending and hiring would do any educational good? You know, if we’d get a positive return on our investment?


Oh wait — if you did that, you’d not only see that it is absurd to suggest that failing to furnish $23 billion would lead to the widespread demise of colleges and teachers (in 2008 we spent almost $1.1 trillion on education), you’d also see that decades of spending increases haven’t produced any meaningful improvements. K-12 test scores have been flat, literacy levels among college graduates dropping, and our international standing poor.


So Senator, feel free to think that a good education is more important than controlling profligate government spending. But don’t try to tell us that spending more will actually provide that good education. That just isn’t true.