New data on worker pay in the government and private sector has been released by the Bureau of Economic Analysis. There is good news: the pace of federal pay increases slowed during 2015, while the pace of private-sector pay increases picked up.

Private workers thus closed the pay gap a little with federal workers in 2015, but there is a lot of catch up to do. In 2015 federal workers had average compensation (wages plus benefits) of $123,160, which was 76 percent higher than the private-sector average of $69,901. This essay examines the data in more detail.

Average federal compensation grew much faster than average private-sector compensation during the 1990s and 2000s. But the figure shows that federal increases have roughly equaled private-sector increases since 2010. President Obama modestly reined in federal pay increases after the spendthrift Bush years. Will the next president continue the restraint? 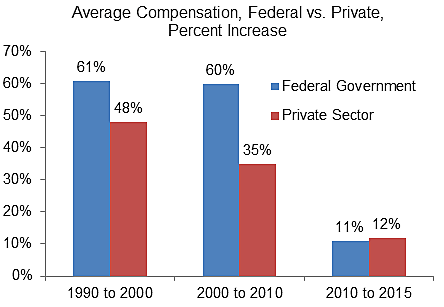 For background on federal pay issues and the BEA data, see here.