Washington Governor Jay Inslee is throwing his hat in the ring for President of the United States. The central focus of his campaign for 2020 will likely be climate change. In an echo of the Green New Deal’s grand vision, Inslee says in a new video that he wants “100 percent clean energy, that will bring millions of good paying jobs to every community across America, and create a more just future for everyone.”


However, Inslee has been remarkably unsuccessful in convincing residents of his own state to go along with his tax‐​and‐​spending plans for climate change. He has not been able to get a carbon tax passed through the state legislature and carbon tax plans have failed twice on statewide ballots.


Governor Inslee was assigned an “F” on the 2018 Cato Fiscal Report Card. He was the worst‐​scoring governor on the report. His appetite for tax and spending increases has been insatiable since he entered office in January 2013.


From the Governor’s Report:

Inslee has pushed relentlessly for tax increases. He originally campaigned on a promise not to raise taxes, but he proposed more than $1 billion in higher taxes in his first budget in 2013. In 2014, he proposed a new tax on capital gains and increases in cigarette taxes and other taxes. In 2015, he approved a gas tax increase as well as higher taxes on businesses. In 2016, he proposed broadening the bases of various taxes to raise funding for education.


Inslee has continued to advocate for a carbon tax even though the idea has been rejected by both the state legislature and Washington’s voters. In November 2016, voters rejected a carbon tax (Initiative 732) by a solid 59–41 margin. But in the wake of that defeat, Inslee has continued to push for such a tax; his latest plan is designed to raise at least $750 million in its first year and growing amounts after that. So far, the plan has failed to pass the legislature.


Carbon‐​tax supporters keep trying, and they have put another scheme on the ballot for November 2018. Voters will decide on Initiative 1631 whether to impose a new tax on carbon emissions to raise about $800 million a year by 2027. The tax would be collected from various industries, although the plan exempts certain politically favored industries.


Inslee also scores poorly on spending. The current biennial general fund budget is up 17 percent over the prior budget. State government employment has risen more than 7 percent since Inslee took office. 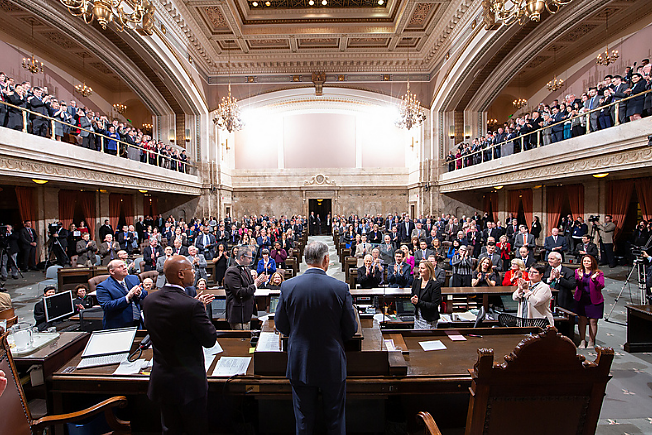