Government policies encourage Americans to live in risky places on seacoasts and along flood‐​prone rivers. Disasters happen, governments bail people out, they rebuild in the same places, bad incentives stay in place, further disasters strike and more dollars and lives are lost.


The Washington Post reported on recent flooding along the Mississippi River, which I’ve excerpted below.


But first, here are some general points about flooding and governments:

The city [St. Charles, MO] of about 70,000 has long grappled with flooding from the Missouri and Mississippi rivers, as well as rising water from creeks and streams — making it one of the most flood‐​prone regions in the state, with some $18 million in flood insurance claims paid out since 1970 by the Federal Emergency Management Agency.


Yet that hasn’t stopped the city from planning a $1.5 billion riverfront development along the Missouri’s banks, 120 acres of upscale shops, restaurants and apartments mostly in the river’s flood plain, an area that has been partly submerged this summer.


Several hundred miles to the south, Louisiana is experiencing the fallout from decisions like that one — decades of rampant development behind tall levees that have cut the Mississippi and its many tributaries off from the vast open floodplains the rivers once carved for themselves.


Tropical Storm Barry, which made landfall Saturday as a hurricane, is predicted to travel up the Mississippi toward St. Louis, deluging surrounding areas as it goes, with rainfall that will be channeled back toward the Louisiana coast in days to come — the latest potential catastrophe.


“The major cause of record, recent flooding is entirely man‐​made — the dramatic constriction of our large rivers by oversized levees, flood plain development and structural narrowing for barge traffic,” said Robert Criss, professor emeritus with the Department of Earth and Planetary Sciences at Washington University in St. Louis.


This year’s historic floods throughout the Midwest caused billions of dollars in damages; washed out highways, bridges and dozens of levees; swamped crop lands and cities; sent residents fleeing for their lives; and left a death toll in several states.


Decades of development have contributed to the problem. Claims to FEMA’s flood insurance program have increased rapidly in the past two decades and spread beyond coastal regions.


… Yet with millions of people living in flood plains and shipping and tourism economies built on these key waterways, there is little political will for change. Environmentalists charge that jurisdictions hungry for tax revenue are continuing to plan risky projects without taking floods’ worsening intensity into account, heedless of the economic and human consequences.


“It’s lunacy,” said David Stokes, executive director of the Great Rivers Habitat Alliance. “They’re continuing to build in places where Mother Nature intended water to go. And there’s no end to it.” 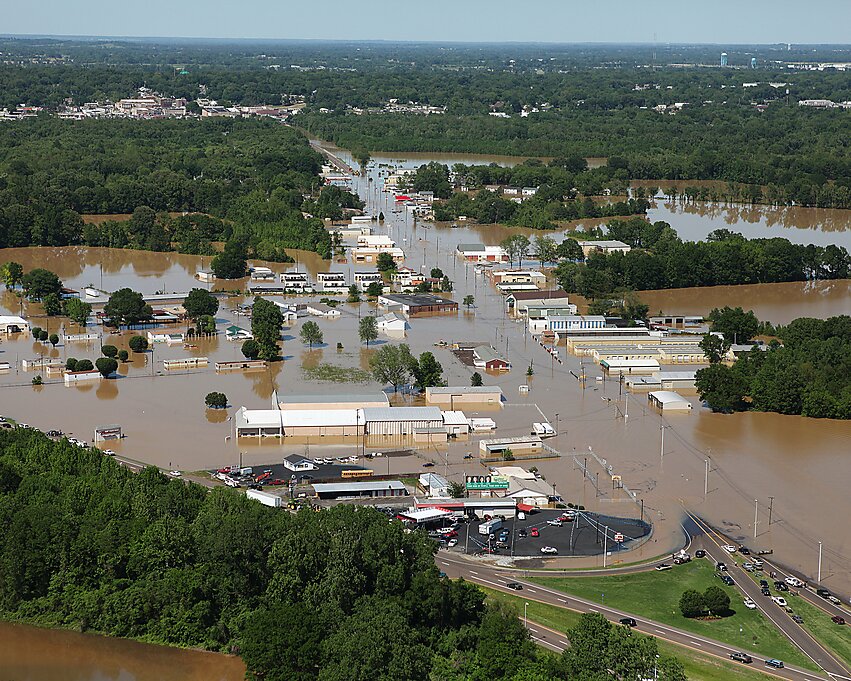