Government Spending Up, Private GDP Down

It drives a lot of us at Cato nuts to read news stories almost every day which simply assume that government spending is good for the economy. Any defense or nondefense spending restraint will hurt economic growth, it is assumed. Even a recent AEI study seemed to accept this Keynesian concept.

Government spending certainly helps the government-dependent parts of the U.S. economy. But most Americans live in the private economy, and so they might like to know how government budget actions affect the economy that they live in.

So let’s explore the spending-to-growth relationship with national income accounts data. I ran a simple regression with 60 years of data, 1953 to 2012. The variable I was trying to explain was real private GDP growth. Private GDP is total GDP less the government portion of GDP from Table 1.1.5. The explanatory variable was total (federal/state/local) government spending from Table 3.1. Both variables were converted to constant dollars using the GDP deflator. 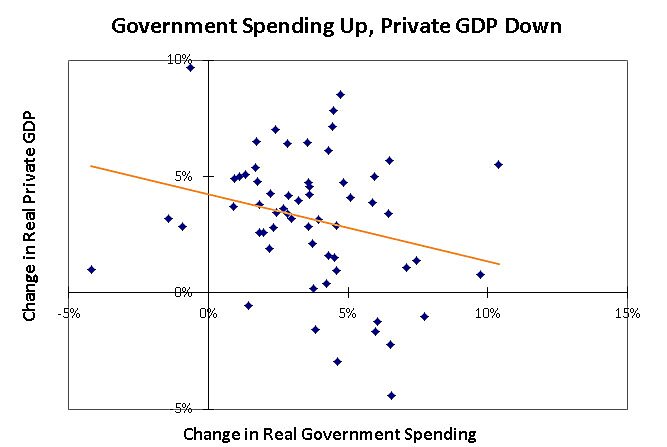 The F-statistic for the regression was 4.1 indicating overall significance at the 95 percent level, which is the usual level economists look for to be confident of a solid relationship. The T-statistic on the government spending variable was 2.0, which indicates significance at over 95 percent. (Note that the statistical results were even stronger when I included data back to 1946 because post-war government cuts coincided with robust economic growth.)

The R-square of the regression was low, indicating that changes in government spending only explained a small portion of current-year GDP growth. That makes sense because a myriad of other factors affect GDP growth, including economic growth in other countries, regulatory factors, oil industry shocks, technology shocks, etc.

Personally, I’m suspicious of statistical “proofs” of economic relationships. But I do think that even broad-brush results such as this should give pause to the reporters and policy wonks who often write articles with hidden Keynesian assumptions. I think that the harm from increasing government spending affects the economy over a longer period of time. But even these single-year regression results suggest that people should be skeptical of the widely held notion that the economy is like a car and the government can speed things up by simply stepping down on the spending gas peddle.

P.S. I’m happy to share my data upon request if people want to check for any Reinhart-Rogoff problems.