In a remarkable surrender to Big Government, Senator Ted Cruz of Texas voted for the budget deal last week that hiked spending $300 billion over two years. The deal essentially scraps the Budget Control Act, pushes the deficit over $1 trillion, and sets the stage for $1.5 trillion more in spending over the coming decade.

Why did Cruz do it?

Because the deal included disaster-related spending for Texas, according to Cruz’s comments. Yet the senator surely knows that for practical and constitutional reasons, federal subsidies for local and private disaster rebuilding makes little sense. (I discuss here).

In his comments on the deal, Cruz lamented, “This bill will increase our deficits and increase our debt. That’s foolhardy…we should be reining in government spending.”

Yet Cruz explains: “Washington logrolling sometimes forces lousy choices. This is one of those choices.”

Suppose the government had just two programs, A and B. Supporters would seek spending increases, but some legislators may not have much A and B spending in their states, and thus might favor restraint to save money.

Now Congress adds a new program, C. It appeals to members with different interests and in different states than A and B. The addition of C strengthens support for A and B because supporters of C must vote for A and B to gain support for their program.

Perhaps you know that Congress puts farm subsidies and food stamps in the same bill to combine the support of rural and urban members. But you may not know that Congress started subsidizing dams in the West a century ago because Western legislators wanted something in return for their support of Army Corps projects in the East. That is logrolling. It explains much of the history of federal government expansion, and it runs counter to the democratic ideal of true majorities approving specific policies, as I explain here.

The figure shows a hypothetical relationship between the size and scope of the government. Let’s call it the “Spending Size and Scope Curve.” As the number of programs increases, total spending rises for two reasons. First, each new program costs money. Second, the logrolling network effect. As it adds programs, the government spends more on existing programs as well as the new ones, so the curve bends upwards. 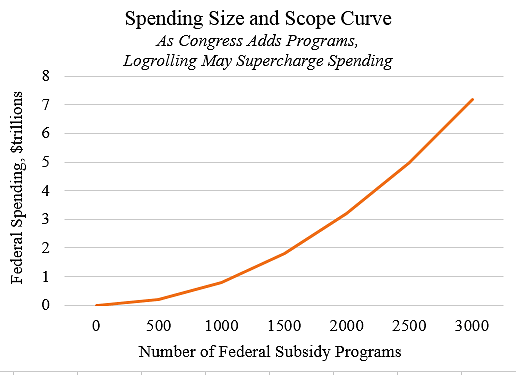 The federal government currently spends $4.1 trillion a year and has about 2,300 subsidy programs.

The chart is theoretical and would need to be assessed empirically. In reality, the upward bend may be muted because other forces are at work. For one thing, there may be competition between programs for funding within Congress. Conservatives may favor restraint in nondefense programs to create budget room for defense. Liberals may favor restraint in defense to create budget room for nondefense programs. So as new programs are added, it may intensify spending competition between programs.

Unfortunately, such funding competition between programs has been greatly weakened by today’s massive deficits. Federal deficits have trended upwards since the 1950s, which has buttressed the power of logrolling by undermining the need for legislative trade-offs.

What’s the upshot? The number of federal subsidy programs has doubled since the 1980s. That has strengthened the power of logrolling and put upward pressure on spending. It would have been harder for congressional leaders to buy off Senator Cruz in the 1980s because the federal government was not in the business of huge disaster bailouts at that time.

How can we restrain federal spending? A constitutional cap on spending or deficits would force more funding competition between programs. Also, fully eliminating even small programs would reduce the fuel source for logrolling. We’ve seen in recent years that many members line up to support major bills if even small scraps for obscure programs are thrown their way.

I discuss the mechanics of logrolling here.