Political scientist Matt Grossmann discussed the results of his research on federal government growth in the Washington Post last week.

I combed through hundreds of history books covering American public policy since 1945, tracking the most significant domestic policy changes that made it into law and the actors that historians credit for those changes. Of the 509 most significant domestic policies passed by Congress, only one in five were conservative, in that they contracted the scope of government funding, regulation or responsibility. More than 60 percent were liberal: They clearly expanded government. The others offered a mix of liberal or conservative components or took no clear ideological direction.

Grossman mentioned one of the structural reasons why this has happened:

Liberal policies are self‐​reinforcing because they create beneficiaries who act as constituencies for their continuation and expansion. Policy debates center on what additional actions government should take, not whether to discontinue existing roles.

Grossman is essentially saying that not only has the size of the federal government expanded, but so has the scope. The problem is not just that programs such as Medicare keep growing, but also that Congress keeps adding new programs.


The following chart shows an official count of the number of federal benefit, subsidy, and aid programs—Medicare, farm subsidies, food stamps, and more than 2,000 others. The source is the CFDA website for recent years and hard copy CFDA catalogs for the older years. 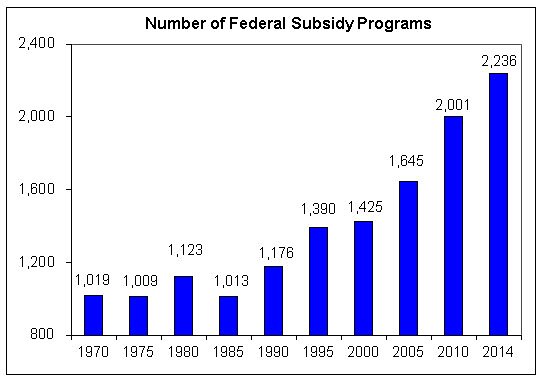