GOP Getting Killed by Distribution Tables

Republicans are letting themselves get cornered by slanted tables appearing to show the rich gaining the most from tax reform. The official distribution tables are not presenting GOP tax changes in a fair manner, as I discuss here.


But Fox News also? On Sunday, Fox displayed this image, and host Eric Shawn asked Rep. Jim Renacci, “…if you make more than a million, if you’re a richie, you save $21,000 … Do you think that’s fair and appropriate?” Renacci did not do a good job of pushing back. 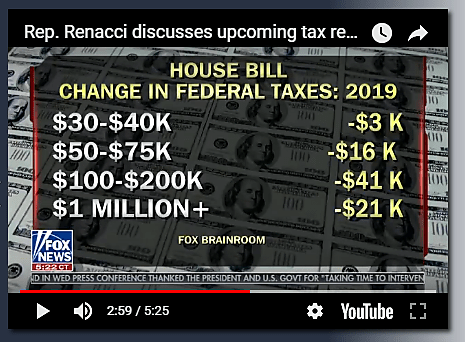 Presenting dollar cuts with no context is meaningless. The proper context is how much people currently pay in the taxes being cut. (The Fox figures are way off, by the way).


The table below shows Tax Policy Center estimates of average cuts for the Senate bill in 2019, and my estimates of the average amount paid in individual income, corporate income, and estate taxes under current law. The “richies” might get the largest dollar cuts, but they will pay an enormous pile of taxes in 2019 with or without the GOP reforms.


The $30-$40K group won’t pay any federal income taxes under current law, on average. So the “cut” that group receives would stem from more people not paying anything and from an increase in refundable credits, which are spending subsidies.


Republicans cannot tell Fox News what to report, of course, but they can require that its own Joint Committee on Taxation show more detail in its tables and to present tax changes in a fair context, which it is not doing. In turn, that may encourage news outlets to present the GOP plan in a more accurate and neutral light.