There is good news for taxpayers regarding federal disability programs. The strong economy and administrative reforms have begun reducing caseloads for the Social Security Disability Insurance (SSDI) and Supplemental Security Income (SSI) programs. These are huge programs—SSDI cost $144 billion in 2018 while SSI cost $55 billion.


The Wall Street Journal reports the good news here. The themes in the story dovetail with analyses of SSDI and SSI at Down​siz​ing​Gov​ern​ment​.org. Tad DeHaven noted that many marginally disabled people who should be working instead decide to go on disability, especially when the economy is poor. DeHaven also called for greater quality control on SSA case decisions to limit benefit awards, and it appears that there have been moves in that direction.


SSDI and SSI still have major problems of bureaucracy, excess utilization, and the disincentivizing of work, but the WSJ story indicates that progress is being made.

Mr. Mort is part of a wave of disabled Americans joining or returning to the U.S. labor force, breaking a long‐​running trend that had pushed millions to the sidelines of work. These workers have benefited from a tight economy with a very low overall unemployment rate—3.9% in December, just above lowest level since 1969—as employers in many sectors tackle a shortage of available workers by becoming more creative about whom they recruit.


The number of American workers receiving federal disability benefits dropped to 8.5 million in December from a peak of 9 million four years earlier as the share of disabled Americans in the labor force rises.


… Two factors are at play. First, the tight labor market is causing employers like Gordon Food Service to expand their search for job candidates. Second, Social Security disability benefits—which for many became a de facto second form of unemployment insurance after the last recession ended in 2009—have become harder to access.


When the disability‐​benefits system found itself on shaky financial footing a few years ago as its rolls swelled, the Social Security Administration pushed new training guidelines to administrative judges who decide which claims will be granted, with the aim of producing more consistent rulings. Before those efforts, judges in some states approved claims at unusually high rates.


… The share of applying workers whose disability claims were allowed following a medical review in 2016 fell to 48.0%, according to the latest available data from Social Security. That was the first time the rate was below 50% on records dating to 1992. Allowances peaked at 62% in 2001.


… Most people exit the Social Security disability system because they either qualify for retirement benefits or die.


… But people like Mr. Mort are no longer a rarity. In 2017, according to the latest data available, 51,302 people left disability because they found “gainful” employment. That is the most on records dating to 2002 and nearly 30% higher than in 2011.


… The tighter labor market is delivering opportunities to a broad swath of workers who were disproportionately affected by the last recession. Unemployment has fallen sharply for blacks, Latinos, younger workers and those without a college education. 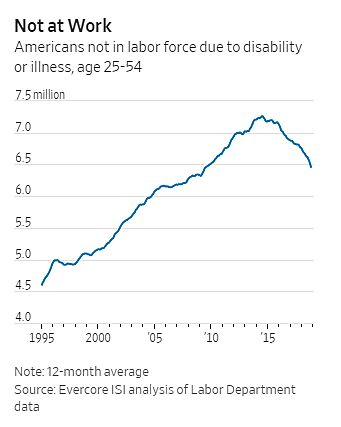 More information can be found at the Down​siz​ing​Gov​ern​ment​.org page for the Social Security Administration.