The Golden Post‐​War Years of Government and the Economy?

I spent the afternoon debating, among others, Rick Perlstein, on the economy. The debate was being taped for Aljazeera TV (set to air tonight some time in the 7 pm hour EST). Rick claimed that since both government and the economy were getting bigger between World War II and the 1970, then growing federal expenditures couldn’t be bad for the economy. The economist in me, was thinking, well what does the data say? Obviously we didn’t have the data at hand, so the issue was not explored any further.


I’ve tried to reproduce the core of the question in the graph below, which shows on the left axis federal spending as a share of GNP and on the right axis the real increase in GDP, both measures on a quarterly basis. If the visual trend is not enough for you, the correlation between the two is a negative 0.4. Keeping in mind that correlation isn’t causality, it does appear that as the federal government increased as a percentage of the economy, the growth rate of the economy slowed.


During most of this period federal spending to GNP averaged around 16% (can’t we at least get back to the magical 1960s level of government?), while the annual growth rate in GDP averaged 3.9 percent. I find the pattern starting around 1966 to be particularly interesting as we witnessed both a sharp increase in the size of government and a dramatic fall in the growth rate of the economy. Of course I don’t expect those wedded blindly to a faith in big government to find any of this convincing, but for those of us with an empirical fact‐​based bent, it does suggest to me that had we restrained the late 1960s growth in government, our economy would be a lot bigger today (but then who cares about the size of the pie when you can fight over the pieces?). 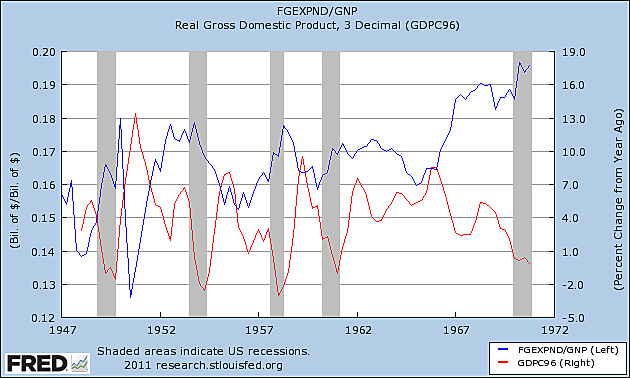