The Global Poor, the Great Enrichment, and the American Working Class

Americans have lately been debating the tradeoffs we face as the global poor rise. Their gains have been enormous and unprecedented. And yet the American working class has struggled to better itself even as conditions have improved for most others: 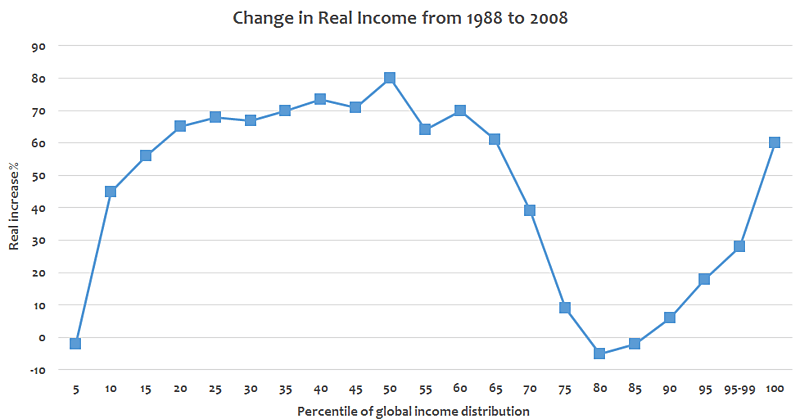 Percentiles 80-95 contain many from the relatively rich countries' lower-income classes; there are a lot of Americans in there. Other factors may be at work, but let’s say for the sake of argument that the gains by the global poor have on balance harmed at least some of them.

So why is this happening? Is it part of some other nation's malicious plan? Is it China, perhaps? Or India? Or did we inadvertently do it to ourselves, through bad trade agreements or “soft” foreign policy?

It’s natural to want to make the story about us, or our actions, or a villain who threatens us. Those sorts of explanations are politically useful; they suggest that the right leader can get us out of the mess we’re in.

But maybe the correct explanation isn’t about us at all. One way to see this is to ask a slightly different question: Why is the Great Global Enrichment happening right now? Why didn’t it happen in the 1960s? It happened in the 1960s in Japan, after all. It presumably could have happened elsewhere too. So why not?

The left-hand side of the graph contains few Americans or Europeans. It's mostly made up of people from India, China, and Africa. In the 1960s, India was undergoing a slow-motion economic suicide, nationalizing major industries under Jawaharlal Nehru and Indira Gandhi, and pursuing economic autarky in the false belief that that’s just what industrializing nations need to do. China’s economic suicide was much more dramatic, with the Great Leap Forward bringing ecological disaster, mass starvation, and tens of millions of deaths. Over in Africa, a colonial-era infrastructure geared toward extraction found ready use in the hands of socialist and nationalist state agents, who expropriated foreign and domestic investments to enrich only themselves, while scaring away most future investments for a generation.

Things are different today. Since the 1990s, India has steadily pursued economic liberalization, and as a result, its economic growth has accelerated. China is no more than nominally Maoist anymore, and while its human rights record remains lamentable, at least the central government isn’t micromanaging the economy with Lysenkoist pseudoscience. In Africa, expropriation and nationalization of assets are at historical lows, making it safer than ever to invest in Africa, no matter where you come from.

So… maybe the story is not about us. It’s also not about an enemy who threatens us. It's about the rest of the world not shooting itself in the foot anymore. It’s about other societies increasingly adopting economic liberalism, which happens to be very good at lifting people out of poverty.

In the process, the rest of the world is exposing many Americans to market discipline, which, yes, is going to hurt. But the only way to stop this process is to re-impose repressive economic regimes on billions of people. That's a step that's equal parts unwanted, unrealistic, and unethical, and the transformation at hand is just too big to be much affected by anything else that we might do.

Both sides of our political spectrum have purely venal reasons to want the story to remain about us. The left doesn’t want to admit that economic liberalism beats command-and-control socialism when it comes to mass enrichment. The right has lately embraced economic populism as a check on a purportedly hostile world -- a worldview that positively requires one or more villains. But maybe we don't live in a hostile world. Maybe we live in an increasingly excellent world, one that we created inadvertently, through the power of good examples. If so, that’s not a change that we should want to undo. Let them have their freedom, let the curse of poverty be lifted, and let the competition continue.