Global economic freedom improved slightly to 6.85 on a scale of 0 to 10 according to the new Economic Freedom of the World report, co-published in the United States today by the Fraser Institute and Cato. The United States still ranks relatively low on economic freedom, and is below Chile (13), the United Kingdom (10) and Canada (5). The top four countries, in order, are Hong Kong, Singapore, New Zealand and Switzerland.

The long-term U.S. decline beginning in 2000 is the most pronounced among major advanced economies. It mirrors a pattern among OECD (Organization for Economic Cooperation and Development) nations of steady increases in economic freedom in the decades leading into the 2000s, a fall in freedom especially in response to the global economic crisis, and a subsequent slight increase from the low. (See the graph below.) Neither the United States nor the average OECD country has recovered the high levels of economic freedom that they reached last decade. 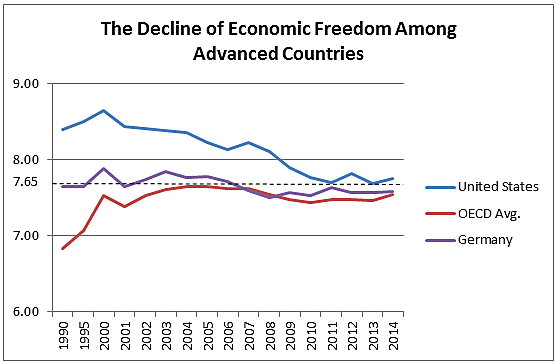 Given that economic freedom is strongly related to prosperity and progress in the whole range of human well-being, the relatively low levels of the advanced countries are worrisome. Economic freedom in the top countries affects not only those nations, but exerts great impact on the global economy and human well-being around the world. A chapter by Dean Stansel and Meg Tuszynski documents the decline in the U.S. level of economic freedom and how it tracks the decline in the health of the U.S. economy since 2000. From 1980 to 2000 U.S. GDP grew 3.4% per year on average, compared to 1.8% thereafter. Stansel and Tuszinski describe how specific policies have weakened property rights and every major category of economic freedom studied in the index.

The rise in global economic freedom in the past 35 years has brought huge improvements to humanity. Authors James Gwartney, Robert Lawson and Josh Hall document the convergence in levels of economic freedom between developing and developed economies. Poor countries are catching up to rich countries in terms of economic freedom. This helps explain the unprecedented gains in global poverty reduction during this period (see the graph below). 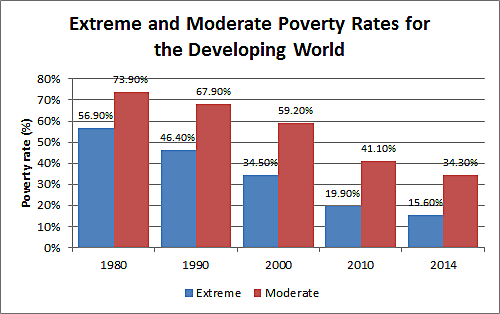