A Glimmer of Good News: Widespread Gains in Life Expectancy at Birth

There are three different methods of analyzing inequality in mortality: across counties, by educational attainment, and by career earnings. The latter two approaches have been more commonplace in the recent literature. As the authors note, analyzing by education suffer from changes in the underlying composition of the categories they are using. In people with only a high school education in 2010 was much different than the group with the same level of educational attainment twenty years ago. Using relative income levels runs into some data limitations and problems with reverse causality, in that some cases poverty or limited might be caused by health issues instead of the other way around. For these reasons, the authors instead turn to the third method and analyze inequality in mortality by geographic region, counties in this case. 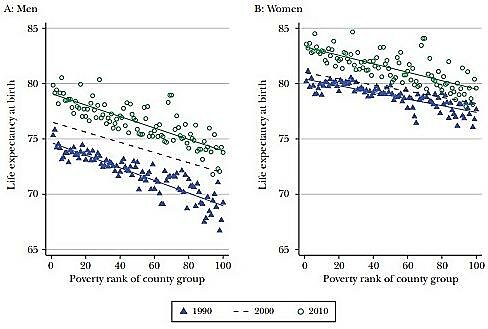 In the first decade they analyze (1990-2000), there were greater reductions in mortality in poorer counties for both young children (under 5) and older children (5 to 19) than in richer ones, leading to a reduction in mortality inequality at the same time overall income inequality was increasing. Even in the working age group (20 to 49) men in poorer counties experienced significant declines in mortality while those in richer ones did not. The exception to this trend was in the group over age 50. Here the authors corroborate some of the earlier studies, where gains in life expectancy were larger in richer counties, even as all counties saw improvements over the twenty year period.

The authors also extend their analysis to age and race-specific mortality, and here there are more positive developments, with a “truly remarkable reduction in black mortality rates” for children under five from 1990 to 2000, with smaller but still notable gains in the second decade. For people over 50, mortality rates fell for every race and gender category they investigated. The exception to these broad-based gains is for white women between ages 20 to 59. Mortality rates for this group stagnated, and in some poorer counties even increased, over the twenty year period, echoing findings from some earlier studies like this one from Anne Case and Angus Deaton.

These different trends in different age cohorts and locations cut against attempts to explain them through any one mechanism, like changes in income inequality. This paper also offers a respite from the drumbeat of studies highlighting increases in mortality inequality at older ages, and some evidence that the better outcomes the authors observe for younger age cohorts will continue, and they “may well be healthier and suffer less mortality inequality in the future.” While analyses of mortality rates and life expectancy are always valuable due to their implications for a wide range of policy spheres, studies like this one can be even more important as a counterbalance to the news and a political landscape that can sometimes seem so unrelentingly bleak.